See Ezra Koenig tell Gordon Smart about the band's new Father of the Bride album, as they perform for Radio X's Soundcheck Sessions.

Vampire Weekend have set the internet alight this week after returning with their fourth studio album Father of the Bride.

The New York outfit, who are fronted by Ezra Koenig, celebrated the release of their first record in six years by sitting together with Gordon Smart for Radio X's Soundcheck Sessions before playing the 900 capacity, Grade II listed building, Islington Assembly Hall.

In our video, the Contra singer talks about everything from the new album and its influences to the band's career and longevity, plus we get to see the band play some stunning renditions of their latest tracks and an old, much-loved favourite.

See it all in our video above.

In our Soundcheck Sessions, Koenig revealed how their Harmony Hall single began as a Baroque-style piano part and why the single was borne from a love of Madchester baggy tunes and EMF's You're Unbelievable.

The A-Punk rocker also revealed the "cheating on you" refrain on their This Life single actually comes directly from an old demo from a rapper... who also just happens to be his friend.

If that wasn't enough Vampire Weekend goodness packed into one video for you, you can also see the band perform Harmony Hall, This Life, Sunflower and their nostalgic noughties banger, A-Punk, which catapulted them to fame in 2008.

Vampire Weekend's Father of The Bride album is out now.

Father of the Bride has arrived. You can listen & purchase here: https://t.co/Up1YXERTMc pic.twitter.com/iPKdFN15WZ

Watch Ezra Koenig talk about the tracks that changed his life:

READ MORE: Why Meatloaf confused Ezra Koenig as a child... 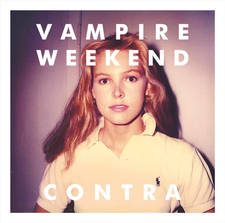 Ezra Koenig on why Meat Loaf confused him as a child