Ezra Koenig on why Meat Loaf confused him as a child

In The Tracks That Changed My Life, the Vampire Weekend frontman explains why didn’t understand what “I Won’t Do That” meant…

Vampire Weekend’s Ezra Koenig has been telling Radio X that he’s spent the last 25 years thinking about a classic Meat Loaf song… and wondering what specifically what the singer wasn’t prepared to do for love.

Koenig was taking Radio X through The Tracks That Changed My Life - our new series that sees stars tell the stories behind the milestone musical moments in their lifetime.

Picking a track that takes him back to his childhood, Ezra pondered on the mystery that was Meat Loaf’s 1993 power ballad I’d Do Anything For Love (But I Won’t Do That).

“It reminds me of when I first had my own radio,” Koenig revealed. “I think my parents got me some little cassette radio thing so I could listen on headphones. When I was eight or nine, this was a big song - the kids at school would talk about it, too. It was very mysterious."

“It was the first time there was a viral song that I can remember, in my microcosm of my little home town, because everyone wanted to know what does it mean? I’d do anything for love… but I won’t do that.

“I was a kid and that was the first time I was like, What does this mean? And I’ve thought about it quite a bit since then.”

Also on Ezra’s personal playlist are tunes by Daft Punk, Sounds Of Blackness, a Kate Bush classic and a banger by Eric Prydz - watch the whole video to see which tracks he chooses.

See Foals pick the Tracks That Changed Our Lives: 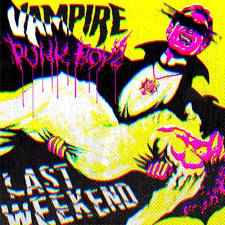