The Oxford band release their seventh studio album, a celebration of life after lockdown. Hear the stories behind the songs, as told to John Kennedy.

Foals have taken Radio X's John Kennedy through their new album, Life Is Yours.

The Oxford-formed outfit - who are made up of Yannis Philippakis, Jack Bevan and Jimmy Smith - have released their seventh studio album and the follow-up to 2019's Everything Not Saved Will Be Lost - Parts 1 and 2.

The record is a response to two years of COVID-enforced lockdown and aims to embrace the party feeling.

Speaking about the album, the band said: "While we were writing in the throes of last winter, we wanted to find a new way to express ourselves. We wanted to refocus and do something that shared a DNA throughout the songs: a physicality, a danceability, an ode to nights out."

You can watch Yannis and Jimmy take John Kennedy through Life If Yours track by track above.

Life Is Yours is the band's first album as a trio, since the departure of bassist and keyboard player Edwin Congreave in September last year and features the upbeat Radio X Records Of The Week, 2am, 2001 and Wake Me Up.

"We were trying to write a record for all the things that were missing during COVID," Yannis explained. "We were really missing nights out, socialising and live music. So the songs are vessels to transport you to that,

"They're just f**king great tunes that will make you feel good and make you hug your friends... and get wild."

Foals - Life Is Yours album tracklis:

Of the song 2am, Yannis told Radio X earlier this year: "Musically it's one of the poppiest songs we’ve ever written. It’s about repetitive cycles of destructive behaviour, which I think lots of people can relate to, and certainly it’s an expression of something that I struggle with. There’s something cathartic about putting that to this joyous, upbeat song that’s got a sense of release.” 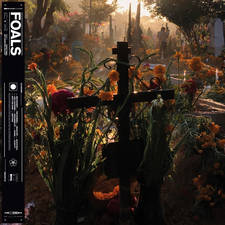