The Baz Luhrmann biopic - starring Austin Butler and Tom Hanks - is out in cinemas now. Find out what when it's released, who's in the cast and what we thought of the film.

Elvis has been given the biopic treatment, with a motion picture from the world of Baz Luhrmann released today (24th June).

The film, which stars Austin Butler in the titular role and sees Tom Hanks play his manager Colonel Tom Parker, has already been gaining attention from fans and family members of the King himself.

So does Elvis the film stand up to the hype? Find out everything we know about the movie and read our review below.

When is Elvis the movie released?

Elvis was released on 24th June 2022 by Warner Bros. Pictures and is out in cinemas now.

Baz Luhrmann has done it again! Elvis is an absolute triumph- a visual and aural spectacle which takes you down memory lane, while also managing to be bang up to date.

Austin Butler completely embodies the spirit of the King and manages not to get swallowed up by the mammoth task of portraying the icon or starring alongside the Hollywood royalty that is Tom Hanks.

There's been a lot said about 'star is born' moments of late, but if there ever was a moment that can be described as such, this is it. Though at first you'd be forgiven for thinking he doesn't look enough like Elvis, Austin Butler's portrayal of Elvis is simply stunning and utterly believable at the same time and (yes we said it) one surely worthy of an Oscar.

Elvis the biopic puts the iconic singer in his true context; a performer heavily inspired by black musicians and deeply influenced by his faith and the church. The film also does well to redress the balance somewhat by paying homage to great black musicians of the time and set Elvis' meteoric rise against the backdrop of racism and segregation.

Baz Luhrmann truly excels in his skills as a storyteller here and just like the King, he ultimately takes care of business.

Deeply moving and entertaining from beginning to end, Elvis is truly one of the best biopics released in the last decade and it will leave you smiling, weeping and dancing in your seat.

Who stars in Elvis the movie?

READ MORE: When is Avatar 2 released?

READ MORE: Our Father - Where is Donald Cline now?

What's on the Elvis soundtrack?

The artists for the Elvis soundtrack has been announced, with a track-listing which includes Eminem & CeeLo Green, Jack White, Kacey Musgraves, Tame Impala and more.

Maneskin's If I Can Dream was previously announced for the original soundtrack for the motion picture. Also set to appear on the soundtrack is Doja Cat.

Listen to Manekin's If I Can Dream track here:

Listen to Vegas by Doja Cat:

What is Elvis about?

A press release reveals: "This film explores the life and music of Elvis Presley (Butler), seen through the prism of his complicated relationship with his enigmatic manager, Colonel Tom Parker (Hanks). The story delves into the complex dynamic between Presley and Parker spanning over 20 years, from Presley’s rise to fame to his unprecedented stardom, against the backdrop of the evolving cultural landscape and loss of innocence in America. Central to that journey is one of the most significant and influential people in Elvis’s life, Priscilla Presley (Olivia DeJonge)."

What are the reactions to Elvis the movie so far?

Elvis' daughter Lisa Marie Presley has called the film "exquisite" adding: "It breaks my heart that my son isn't here to see it".

"I haven’t posted in quite some time because there really isn’t much to say, as I am and will forever be mourning the loss of my son. Navigating through this hideous grief that absolutely destroyed and shattered my heart and my soul into almost nothing has swallowed me whole.

"Not much else aside from my other 3 children gets my time and attention anymore.
However, that being said, I do want to take a moment to let you know that I have seen Baz Luhrmann's movie “Elvis” twice now, and let me tell you that it is nothing short of spectacular. Absolutely exquisite."

She added: "Austin Butler channeled and embodied my father’s heart and soul beautifully.
In my humble opinion, his performance is unprecedented and FINALLY done accurately and respectfully.
(If he doesn’t get an Oscar for this, I will eat my own foot, haha.)

"You can feel and witness Baz’s pure love, care, and respect for my father throughout this beautiful film, and it is finally something that myself and my children and their children can be proud of forever.
What moved me to tears as well was watching Riley and Harper, and Finley afterwards, all 3 visibly overwhelmed in the best way possible way, and so filled with pride about their grandfather and his legacy in a way that I have not previously experienced.

"It breaks my heart that my son isn’t here to see it. He would have absolutely loved it as well.
I can’t tell you enough how much I love this film and I hope you love it too.
Everyone involved poured their hearts and souls into it, which is evidenced in their performances.
Baz, your utter genius combined with your love and respect for my father and this project is just so beautiful and so inspiring. I know I'm being repetitive, but I don’t care, Thank you for setting the record straight in such a deeply profound and artistic way."

READ MORE: The Batman has been confirmed for a sequel 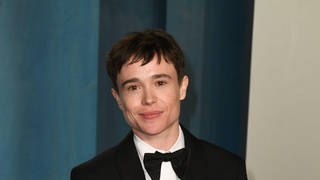