The Scouse rocker has revealed how he came to be in the supergroup, but missed out on a performance with The Beatles legend in 2018.

Miles Kane says it's "typical" that he missed out on the performance of a lifetime with Paul McCartney.

The Scouse rocker is part of the Jaded Hearts Club Band - whose cover of Love's Gone Bad is our Radio X Record Of The Week - and he spoke to Radio X about missing out on a chance to be on stage with The Beatles legend in 2018.

The supergroup - which includes members such as Muse's Matt Bellamy, Blur's Graham Coxon and Jet's Nic Cester - often have differing line-ups depending on their location, which is why Miles Kane missed the chance to perform Helter Skelter with the member of The Fab Four.

Quizzed if he played with Macca on stage, he told Radio X's George Godfrey: "That was the one I didn't do, unfortunately. The others did. All the lads did. They played [his daughter] Stella McCartney's party or something and Paul McCartney jumped up on stage with them, which looked like a lot of fun..."

When George Godfrey mused it was quite the performance to miss out on, Kane joked: "Yeah, typical innit mate? Yeah, Typical".

Just did Macca with Macca #walkinglegend

Kane also talked about how the band first came about and his hopes for performing for them all again one day.

"Well it all started about three years ago when I was living in LA. One of the lads, Jamie, it was his 40th birthday and I think initially he was thinking of getting a Beatles covers band to play his party in this bar and in the end he was like, 'hang on, all my mates are musicians".

He added: "It started off as some fun and now it's become... well, not serious, but it's own little world of whatever it is".

Asked if they plan to take their covers on tour, he replied: "When we can, I'm sure we will. That's the plan and everyone wants to."

"I like it when everyone's there," he added. "I want to be hot and sweaty and especially the Jaded stuff. It lends its hand to that and you want it to be a bit raucous and in your face".

WATCH: The Jaded Hearts Club share new video for Reach Out I'll Be There

Are Beaux and Harry from Too Hot To Handle 3 still together? 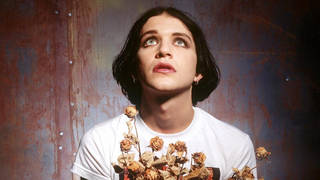