VIDEO: Biffy Clyro would accept the call to support Foo Fighters this year

Watch Simon Neil talk to Gordon Smart about Dave Grohl and co, and reveal why they would "always be there" if asked to support the band.

Biffy Clyro have vowed to support Foo Fighters in the UK if they were asked and as long as they were free.

The Scottish trio visited Radio X this week to talk about their Instant History single and discuss the bands who've inspired them.

When asked by Gordon Smart about the Foo Fighters and whether they'd join them as special guests on their UK dates, bassist James Johnston joked: "I'm not getting back in a van. Dave [Grohl] might do it, but nobody said I was a nice guy! I'm well known for being arrogant!"

"So of course Dave, if you were to call us, we would be there, but at the moment, I guess we're doing our own t'ing".

READ MORE: How did Biffy Clyro get their name?

Speaking about Grohl's humility, the Many of Horror singer revealed: "The best way to describe him, and everybody says this about Dave Grohl, but he makes you forget you're talking to Dave Grohl. He's just so disarming, so whenever you meet him the first thing he wants to do is get you a drink, he makes sure you're comfortable."

"You always find them the same way, which when someone is such an icon as he is [...] you can imagine there's some days you can't be bothered..."

Watch the video for their new Instant History single here:

Meanwhile, Biffy also teased that they could appear at Glastonbury Festival.

Quizzed if they'll be making an appearance at Worthy Farm, their frontman smiled: "That would be telling!"

He added: "We'll be doing a couple of shows this summer. We're not sure exactly what yet, Gordon. It's kinda early days, but we're just getting our summer lined up.

"We're going to be touring later in the year for certain and we're just getting a few bits and bobs for the summer, so we can't say too much".

Watch our full video of the interview here: 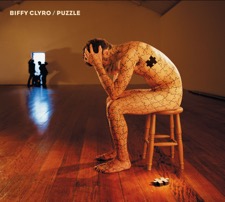