The Geordie singer-songwriter called a fan up on stage who held up a sign offering to sing his Saturday single. See them perform at his Newcastle gig.

Sam Fender performed a duet with a talented fan on stage last week.

The Geordie singer-songwriter played a homecoming gig at the O2 Academy Newcastle on Monday (17 February) ahead of last week's BRIT Awards, when he invited a fan named Jess Lewis-Ward up on stage to sing his Saturday single.

Watch them perform the Hypersonic Missiles track, in a video shared on Twitter by lolaendeanx.

One fan named Tommy Wilson, who was at the gig, explained that it all went down after Jess held up a sign asking if she could sing Saturday.

Seeing the poster, Fender asked the fan if she was "proper mint" and could actually sing the song well.

The lass who sang Jess had a sign that asked if she could sing Saturday with him and said if she can sing it well then she can! Was brilliant to watch happen!

To be fair he asked her if she could sing and was like “are you proper mint tho?” And he said during the European tour some kind got up to play the drums and it wasn’t great so it’s just a risk he takes

Luckily, he need not have worried, as Jess pulled off an amazing duet, which fans have called "amazing" and a class moment".

The fan in question also took to Twitter to comment on the "absolutely mental" moment, gushing: "still pinching meself".

Get the setlist from Sam Fender's date at the O2 Academy Newcastle on 17 February:

The performance comes after Sam Fender gave us an update on his health.

Asked how his voice was by Radio X's Steve Ferdinando at the NME Awards this month, the Play God singer said: "Great man, I've just got the all [clear]."

Watch our interview with the singer-songwriter here:

He added: "It's a little bit tired from the flying and the singing on the weekend, but I went in and had it scoped today and [they said] 'you're ready to go back', so I'm back, I'm back!"

Quizzed about his epic duet with Elton John at his 28th Annual AIDS Foundation Academy Awards Viewing Party, where they sang his Will We Talk? single, Fender gushed: "You know what it is? He just hasn’t lost any of that range and he’s just killing it."I was like ‘Aye, he’s probably not going to go for those higher notes’ and he was just ripping it.” 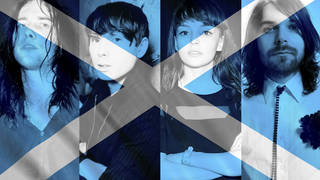