A club night that only plays Oasis non-stop is launching

The club night will play four hours of back-to-back tracks and launch in London next month, while visiting Manchester and Dublin in May.

A new club night is set to launch which plays only Oasis music next month.

The night, which is the brain child of Back to Back, is aimed at mega fans of the Manchester band and promises "All Oasis all night".

The event will be launched at London venue Dingwalls on Friday 13 March, and will visit Manchester's Off The Square on 1 May and Dublin's Workman's Club on Friday 15 May.

The nights, which run from 11pm to 3am also promise Oasis b-sides, live tracks and rarities, with songs also played on request.

Tickets are on sale at backtobackclub.com

READ MORE: Where did Oasis get the title Standing On The Shoulder Of Giants from?

READ MORE: Why Liam Gallagher doesn't like watching Man City at the Etihad

Meanwhile, Liam Gallagher seems to think we don't have to wait long for an Oasis reunion, despite not being in communication with his brother Noel.

In recent times, the Wall of Glass singer has declared that the former Manchester band have been offered millions to reunite, while Noel has heavily denied the claims.

Asked who's telling the truth, Liam said: "Let me tell you this: it has been offered and he knows about it. He’s obviously gonna say no, because he’d like to be the person to break the news to people because he’s the fucking oracle. And obviously I’m his little brother, who’s doing well and I’m here to spoil the fucking party."

READ MORE: David Schwimmer says Friends reunion is more likely than Oasis getting back together

READ MORE: The real story behind Oasis anthem Don't Look Back In Anger 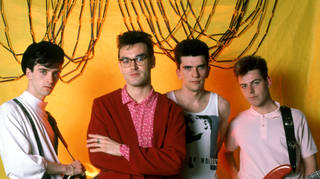