The Kaiser Chiefs frontman has rubbished claims he'd be on the show, but said he'd happily appear on Eastenders.

Ricky Wilson would never appear on I'm A Celebrity... Get Me Out Of Here!

The Kaiser Chiefs frontman was recently asked if he'd be taking part in the show, either in the Welsh Castle or the Australian Jungle and he revealed he'd never appear on any show where he'd be judged.

However, the I Predict A Riot rocker wouldn't mind appearing on a soap such as EastEnders.

"If they asked me to go and stand at the bar at the Queen Vic, yeah I could do that," he admitted. "No-one's judging me and saying I'll give that lean a seven out of 10."

We thought he'd at least have said Emmerdale or Corrie!

Meanwhile, the Leeds rocker told Bang Showbiz that there's "always an album on the horizon," when it comes to Kaiser Chiefs, adding that it's "just [about] working out how far the horizon is.

“I don’t know when, we have a lot of material, just been in the studio last week with Nile Rodgers and been writing stuff with him.

"You'll probably hear something from those sessions in spring."

The Oh My God singer also revealed that inspirations for songs come to him in his dreams and he has to quickly run and sing them before he forgets them without waking up his wife.

"I have to sneak off in the middle of the night with something in my head and record it in the bathroom," he told the outlet. I'm not allowed to do it in the bed anymore because it wakes Grace up...

"It’s not a complete song it’s an idea but I try to grab hold of those as quickly as I can. Always write it down or record a voice note as soon as you wake up.

“It always happens to me when I’m worried about stuff, that’s when I’m most creative in my dreams.”

QUIZ: How well do you know the lyrics to Oh My God by Kaiser Chiefs? 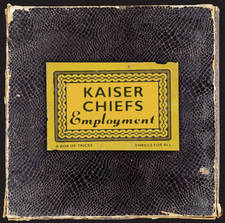