The Uh Huh singer took to social media to speak out about the incident, and thank "countless other men in the room" who supported her.

Jade Bird has spoken out about receiving sexist abuse from a male member of the crowd during her Brighton gig.

The Uh-Huh singer is currently playing dates across the UK and took to Twitter to share her experience in a passionate post entitled "About last night.. power on".

In her tweet, which was posted on Wednesday (13 November), the singer-songwriter began: "So last night's show, it was going great until a guy decided to ask me 4 songs in if I was "Doing requests"

"No I'm not doing requests," I responded. After I announced the next song 'what am I here for,' "To do the washing up' he replied."

The Uh Huh singer continued: "I often comment on being 'strong' minded, having 'strong lyrics' etc but that confrontation made my hands shake, my throat dry up and after he left the gig was hard to clamber back for me mentally.

"It's so important we keep raising girls up, it's so important feminism isn't a marketing ploy or brand but a support structure to strengthen those who are put in these situations, which often privately are more dangerous. I was told straight after the show that countless other girls had received sexual explicit remarks at their own shows. It's disgusting."

About last night.. power on. pic.twitter.com/76nfIDOvM1

She concluded: "Thank you to the countless other men in the room that were respectful and booed him out after I told him to leave. I wish we'd all evolved with respect for those around us. Until then, we'll power on."

Fans have reacted to Jade's candid and powerful post, with one writing: "I was there and you handled it with such professionalism and integrity."

Another wrote: "As a fellow man - that is so horrible to read. He does not speak for all men. Just those who have no brain cells between them. Unfortunately they are still around in 2019. Just keep on going Jade with your tremendous talent!"

I was there and you handled it with such professionalism and integrity. Good for you for standing up to it. Was fab to see him get kicked out and you to carry on doing your thing! Amazing gig and you have more support behind you than you know ❤️

As a fellow man - that is so horrible to read. He does not speak for all men. Just those who have no brain cells between them. Unfortunately they are still around in 2019. Just keep on going Jade with your tremendous talent!

Her run of shows also includes a date at the O2 Ritz Manchester and culminates in a gig at the O2 Shepherd's Bush Empire, London. 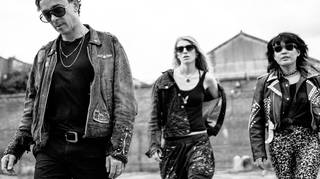