WATCH: Ozzy Osbourne reveals he has Parkinson's in emotional interview

The Black Sabbath legend has revealed his private health battle, saying he is on a "whole host" of medication to treat his nerve pain.

Ozzy Osbourne has revealed he is suffering from Parkinson's disease.

In an emotional interview with his wife Sharon, the Black Sabbath rocker told Robin Roberts about his condition, revealing he wanted to "own up" to his condition for the sake of his fans.

Talking about a recent fall he had, Ozzy said: "It has been terribly challenging for us all. I did my last show on New Year's outside the Forum and I had a bad fall".

The Paranoid singer continued: "I had to have surgery on my neck, which screwed all my nerves and I find out I had a..."

Ozzy - who also known as The Prince of Darkness continued: "A year ago I was in a terrible state.  I'm on a host of medication, mainly for the surgery.

"I've got numbness down this arm and my legs are going cold. I don't know if it's the Parkinson's or what. That's the problem."

The rock couple added that they will be travelling to Switzerland, as they have exhausted all their medical options in the US.

A tearful Sharon said: "We're going to go wherever we can go to find answers," with Ozzy adding: "We're lucky we can afford to do that.".

The rocker said he was relieved at sharing the news, telling Robin Roberts: "To hide something is hard - you never feel proper. You feel guilty. I'm no good with secrets. I cannot walk around with it anymore. It's like I'm running out of excuses.

"I feel better now that I have owned up to the fact that I have a case of Parkinson's..."

He added: "I just can't wait to get well and get on the road again that's whats killing me. I need it you know- that's my drug.

"I ain't going anywhere yet."

The Chemical Brothers cancel Glastonbury set due to COVID 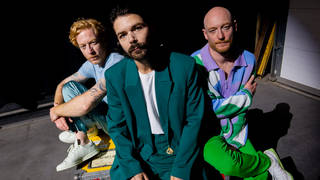