The Sober singer has confirmed the follow-up to 2018's Lighting Matches is complete and he's ready to get his new songs out there.

Tom Grennan has confirmed his second album is finished and should be ready by 2020.

The 24-year-old singer-songwriter released his acclaimed debut album Lighting Matches last year, and has now revealed he's already completed its much-anticipated follow-up, which he has teased will be out next year.

Speaking exclusively to BANG Showbiz in Coventry Town city centre, Grennan revealed: "It's amazing mate, I've written it now, so I'm ready to rumble, I'm ready to get it out.

The Sober singer admitted it's been difficult sitting on the new tracks, adding: "It's been so hard, to know that there's really good songs in the bank - but patience is key, man.

"I'm usually like a dog with a bone, I want want want, and I want it now.

"But good things come when patience has been sat on."

Tom busked for the National Lottery 25th anniversary in Coventry city centre on Monday (21.10.19), and has worked with organisations who have received National Lottery funding and can see first-hand the impact it has.

As a winner of the Lotto funded BBC Music Introducing Award, Grennan has praised them for helping young artists like himself get their music noticed.

The Bedford-born vocalist said: "The National Lottery are celebrating their 25th birthday, and how much money they give to support the arts.

"It's billions and billions of pounds and it's just so important to the UK. Celebrating kids and adults breaking in, giving people the chance to let their creativity out." 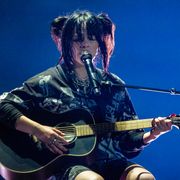 How Sam Fender's Seventeen Going Under became a TikTok hit

The Chemical Brothers cancel Glastonbury set due to COVID