The duo have given the cryptic number "24.09" in a social media post.

Royal Blood appear to be teasing new music in a social media post that shows a car with a number plate displaying the word "ROYAL" and the comment "24.09".

The band's Instagram account has been cleared apart from the artwork and a new press shot of the duo of Mike Kerr and Ben Thatcher.

The pair debuted two new songs called Boilermaker and King during live shows back in the summer of 2019, but this would mark the first new Royal Blood material since 2017's How Did We Get So Dark?

In March 2020, the duo posted a message on Instagram stating that they were to spend five weeks in the studio in isolation recording a new album

24 September falls next Thursday, which could point to a new track being released either that night or the following day, Friday 25 September.

The new material would form part of the duo's third album, following their self-titled debut album in 2014 and How Did We Get So Dark? from 2017.

The "announcement" has unsurprisingly aroused some excitement among Royal Blood fans.

"Yes yes yes yes! Sweet lord Jesus thank you!" tweeted one fan in response to the post, while another said "This just made this shit year better". 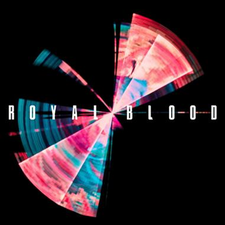 Come On Over (Live)
Royal Blood