The Libertines frontman has confirmed the details of an autobiography, which is set for release on 16th June.

Pete Doherty is set to release a memoir this summer.

The Libertines frontman's tome, which was written with Simon Spence, is entitled A Likely Lad and is set for release on 16th June this year.

The book will be published by Little, Brown UK who shared the artwork on Twitter with the caption: "We are so thrilled to announce we will be publishing @petedoherty memoir, A Likely Lad this June.

"A Likely Lad is Doherty's version of the story - the genuine man behind the fame and infamy. This is a rock memoir like no other."

We are so thrilled to announce we will be publishing @petedoherty memoir, A Likely Lad this June.

A Likely Lad is Doherty's version of the story - the genuine man behind the fame and infamy. This is a rock memoir like no other.

A synopsis for the book reveals: "In A Likely Lad, Doherty explores his darkest moments. With astonishing frankness – and his trademark wit and humour – he takes us inside decadent parties, substance-fuelled nights, prison and his self-destruction. Doherty also reflects on the turbulent relationships with various significant people in his life across the years.

"He discusses poetry, Paris, philosophy, politics, the music business and his key influences (from Hancock to Baudelaire). There is humour, warmth, insight, baleful reflection and a defiant sense of triumph."

It concludes: "This is Doherty’s version of the story – the genuine man behind the fame and infamy. This is a rock memoir like no other."

Fans can pre-order the book here.

Doherty is believed to be clean of drugs for two years and last September saw him marry his La Puta Madres bandmate Katia de Vidas.

Taking to Twitter, he shared an image of them in their wedding outfits, with the date "30.09.21" and a love heart in the caption.

His bandmate and partner also shared a snap of them kissing on their big day with the caption "OUI".

According to the MailOnline, the couple - who have have been together since 2012 - were engaged "for a while" with Katia being spotted wearing a sparkling ring.

The couple live in France currently, and the musician - who was previously engaged to Kate Moss - has successfully overhauled his lifestyle over recent years.

Doherty's recovery shows in his more robust physique. Doherty's life in France and a love of wine and posh cheese on toast has been cited as some of the reasons for his new look.

READ MORE: Pete Doherty says he only queued for Oasis' Be Here Now album to get on the TV 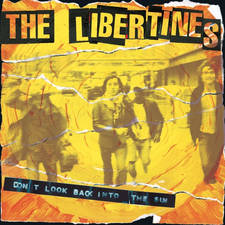