The former White Stripes frontman shocked fans when he proposed to and married his partner on stage during his hometown gig.

Jack White surprised his fans when he proposed to AND married his girlfriend Olivia Jean on stage.

The White Stripes rocker played the first of his two homecoming gigs at the Masonic Temple Theatre in Detroit on Friday 8th April when he invited his partner, who is also a songwriter and producer, on stage to play with his band.

After introducing her as his girlfriend, the musician then popped the question to Jean during a rendition of his famous Hotel Yorba single, which includes the lyrics "let's get married".

White then carried her off the stage - only to later emerge for an encore and live marriage, which was officiated by Ben Swank, the founder of White's record label.

The pair's bass players acted as the best man and maid of honour, while members of their families watched on.

Watch the moment his proposal unfolded on stage below:

Meanwhile, Jack White recently spoke about the impact of The White Stripes' Seven Nation Army single, which he compared to The Beatles' Hey Jude.

Asked about the phenomenon of people chanting the 2003 single in stadiums across the world, the rocker said: "I think some person in music said they thought it was the biggest multicultural hit of all time because there's no words, that they're chanting a melody and there's no need to know the language or to know the words of the song."

He added: "So that kind of gets up there with the 'Na Na Na Na' from [The Beatles] Hey Jude or something like that where you don't need to know any different languages. It's the language of music across the board and that sort of becomes folk music at that point.

"Who could ask for more than that as a songwriter?"

Watch our full Track by Track with Jack White for his Fear of the Dawn album: 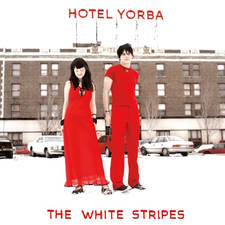