What does Skunk Anansie mean? The story of the band's name and more

Get the story behind Skunk Anansie's name plus more facts about Skin and the band in their fan's Most googled Questions.

Skunk Anansie are one of the most important British bands of the '90s, breaking boundaries and smashing stereotypes since they formed in London in 1994.

The alternative band, who are fronted by the iconic Skin, are known for their hits such as Hedonism, Charlie Big Potato and Weak and are famed for playing all over the world.

Skunk Anansie lived through the Britpop era and made history by becoming the first Black British-led act to headline Glastonbury Festival.

The band have just as much history in their journey as they do their name. So what is the meaning of Skunk Anansie and where does it come from? Find out the answer to this question and more below.

What does Skunk Anansie mean?

The name Skunk Anansie was inspired by the the Akan folk tales of Anansi the spider-man of Ghana, but it was directly inspired by a cartoon Skin watched when she was younger in Jamaica.

Skin told Radio X: "Anansie is the half-man, half-spider nursery rhyme character that I used to watch on TV in Jamaica when I was little. There was this lovely lady called Miss Lou and she used to read Anansie stories on television and she was this storyteller kind of character. So I wanted something that was to do with my heritage. Cass [Richard "Cass" Lewis] came up with the name 'Skunk' because he said skunk is a black and white animal in a jungle and nobody wants to bother that animal. Not even a lion would mess with a skunk.

She continued: "So I put them together because I remember Arnold Schwarzenegger said, people said to him 'why don't you change your name Mr. Schwarzenegger?' And he said, 'because it's really difficult to learn and I think that if you have to learn it you'll never forget it.'"

Skin also said that a lot of the bands at the time such as Blur, Oasis and Elastica all had one words, so she thought having two would make them "stand out a bit".

What is Skin from Skunk Anansie's real name?

Skin's real name is Deborah Ann Dyer. She was born in Brixton, London on 3 August 1967 to Jamaican parents.

Skin's famous name comes from her nickname as a child. She was always called 'Skinny' from a young age due to her small frame. When she got into the band, she halved it just because she thought it was cooler. However, to this day the band and all her friends call her Skinny.

Skunk Anansie were around during the Britpop movement, but Skin doesn't consider them to be Britpop and has distanced herself from the term. She told Radio X: "Britpop was all around, but we were never Britpop. Those guys didn't like us and we didn't like them. We are part of a really resurging rock scene."

She added: "There were loads of amazing rock bands but there wasn't a rock sound. Like Britpop, those bands were completely different from each other."

Despite not wanting much to do with Britop, Skin has recently recalled that Oasis and the Gallaghers were always very nice to them, but Blur weren't as welcoming.

Asked whether she had any run-ins with the two biggest bands of the era, Oasis and Blur, she told NME: “We love the Gallaghers, you know? Damon always hated us."

READ MORE - Skunk Anansie's Skin: Our story was being whitewashed by Britpop 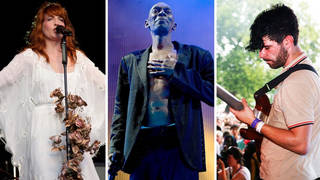