The daughter of Courtney Love and the late Nirvana frontman Kurt Cobain has debuted new material on Instagram.

The daughter of the late Nirvana frontman has debuted a new track, which she sings while playing the guitar.

See a video of the material above, which she shared on her Instagram alongside the caption: “What she lacks in technical precision, she makes up for with charisma”.

It's not the first time the 25-year-old has posted her musical talents online, previously sharing what she called the first "bean" of her original material as well as another track.

Before that Cobain also shared her soulful cover of Leonard Cohen's Hallelujah.

Somewhat of a departure from the gruff, grungy vocals of her mum and dad, she displayed striking vocals which would give Jeff Buckley's 1994 version a run for its money.

Though it's clear she's a fan of an acoustic guitar, she won't be strumming on her dad's 1994 MTV guitar anytime soon.

It was previously reported the guitar was at the centre of the divorce battle between Frances and her ex Isaiah Silva, who claimed that she gave it to him as a gift.

According to TMZ - who claimed to have read the judgement documents - Frances has since allowed Silva to keep the 1959 Martin D-18E on the condition that Silva's new girlfriend vacates the couple's LA house, which now belongs to Cobain under the property settlement.

Frances Bean recently talked about the impact of the loss of her father.

The daughter of the grunge icon who took his life aged 27 in 1994, lost her father when she was just 20 months old, and says her dynamic with him is more like a fan's.

As reported by the Daily Mail, the artist attended the Museum of Style Icons' Growing Up Kurt Cobain exhibition in Ireland on Tuesday with her grandmother Wendy O'Connor and aunt Kim Cobain.

Opening up about her father, she told Reuters: "He's unavoidable in my life, I see a Nirvana shirt every day."

The 25-year-old added: "My dynamic with Kurt is probably more similar to a fan's dynamic as there's almost like an untouchable thing. All the information I have [about him] is from stories. He's there every day of my life."

She continued: "On some days it feels a little frustrating, like I've had emotional breakdowns in Ubers and he's come on [the radio] and I've been like, 'I needed you so much right now.' 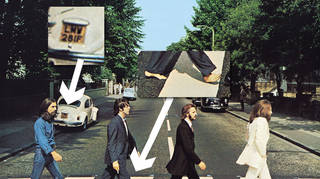