Watch The Cure play a classic track live at Meltdown

Robert Smith and co’s 40th anniversary gigs will be released in a special edition in October - see them play the track Disintegration here.

The Cure’s two 40th anniversary gigs are to be released as a special box set in October - and the band have just released another teaser video.

Titled 40 Live, the set will feature both the acclaimed Anniversary film shot in Hyde Park which was released to cinemas in July and The Cure’s appearance at Robert Smith’s Meltdown in June 2018.

40 Live is released in a Limited-Edition Deluxe Boxset which includes 2 blu-rays or DVDs along with the two shows across four CDs and a 40-page book. The films are also available as a double DVD or blu-ray set with a 16-page book and as a digital download.

CURÆTION-25: From There To Here | From Here To There was the tenth and final night of the 25th Meltdown Festival curated by frontman Robert Smith. The epic date featured two songs from each of The Cure’s 13 albums, plus two unreleased new tracks.

Kicking off with 1979’s Three Imaginary Boys, the show took in songs from the classic albums Seventeen Seconds, Faith, Pornography, The Head On The Door, Disintegration, Wish and more.

Three Imaginary Boys
At Night
Other Voices
A Strange Day
Bananafishbones
A Night Like This
Like Cockatoos
Pictures Of You
High
Jupiter Crash
39
Us Or Them
It’s Over
It Can Never Be The Same
Step Into The Light
The Hungry Ghost
alt.end
The Last Day Of Summer
Want
From The Edge Of The Deep Green Sea
Disintegration
If Only Tonight We Could Sleep
Sinking
Shake Dog Shake
One Hundred Years
Primary
A Forest
Boys Don’t Cry

ANNIVERSARY: 1978-2018 Live In Hyde Park London saw the band mark 40 years as The Cure in front of 65,000 fans as part of Barclaycard Presents British Summer Time on 7 July 2018. Following the film’s global cinema release on 11 July, the show is now available on blu ray and DVD.

Plainsong
Pictures Of You
High
A Night Like This
The Walk
The End Of The World
Lovesong
Push
Inbetween Days
Just Like Heaven
If Only Tonight We Could Sleep
Play For Today
A Forest
Shake Dog Shake
Burn
Fascination Street
Never Enough
From The Edge Of The Deep Green Sea
Disintegration
Lullaby
The Caterpillar
Friday I’m In Love
Close To Me
Why Can’t I Be You?
Boys Don’t Cry
Jumping Someone Else’s Train
Grinding Halt
10.15 Saturday Night
Killing An Arab

THE CURE 40 LIVE - CURÆTION-25 + ANNIVERSARY is out on 18th October and available to pre-order now from https://t.co/HNdaogfqUV 40 LIVE is released in a Limited-Edition Deluxe Boxset (2Blu-ray/2DVD + 4CD’s) and Hardbook (2Blu-ray/2DVD) and on Digital. pic.twitter.com/NvwK6jMk9W

Anniversary was shot in 4K by The Cure's long-term collaborator Tim Pope, who helmed many of the band's classic videos, along with their first live film The Cure In Orange, released in 1987. The audio has been mixed in 5.1 surround sound by Robert Smith and Paul Corkett.

The release follows The Cure’s summer tour dates, which have seen them play some of the world’s biggest festivals, including Glastonbury, Rock Werchter, Pinkpop, Exit, Roskilde and Fuji Rock. They play Glasgow Summer Sessions on Friday 16 August and will continue playing in October, when they headline Austin City Limits festival in Texas.

Friday I'm In Love
The Cure
Download on iTunes 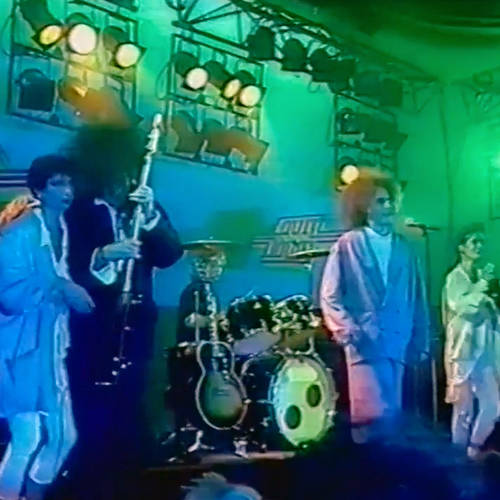