Are they brothers or from another mother? We tell the story of Chad Smith and his fellow famous doppelgänger.

The veteran drummer is most famous for being the Red Hot Chili Peppers sticksman since 1988, but these days he's just as well known for his uncanny resemblance to Will Ferrell.

It's been a few years since people started wondering if the comedic actor and his rock star counterpart were in fact brothers, but it still seems to be a question that never goes out of fashion.

Of course, the stars are not related, with Chad Smith born on 25 October 1961 to Joan and Curtis Smith in Saint Paul, Minnesota while Will Ferrell was born on 16 July 1967 to Betty Kay and Roy Lee Ferrell in Irvine California.

However, it's never stopped the comparisons.

Get the facts and a timeline of their friendship and friendly rivalry below...

Chad Smith and Will Ferrell have experienced long period of success without being closely linked together, but by the 2010's their likeness became a topic of note in Hollywood and beyond.

It was in 2014 when the pair appeared on The Tonight Show Starring Jimmy Fallon wearing the exact same outfit that their similarity began to border on their uncanny.

Their rivalry was brought to the forefront with an epic drum-off, which was intended to unmask the drumming "imposter".

Their battle yielded nearly $500,000 for Smith and Ferrell’s respective charities.

Remind yourself of the moment below:

The drum-off ended in a surprise Red Hot Chili Peppers performance of the Blue Oyster Cult classic (Don't Fear) The Reaper, while Ferrell played the cowbell- a nod to his "More Cowbell" Saturday Night Live sketch.

Cleary the stars must have got on well as by September that year, Chad Smith lent his sticksman skills to a his 90 Minutes With Will Ferrell show, which was once again in aid of Cancer For College.

But the story doesn't end there... 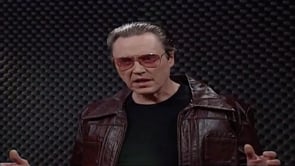 "I gotta have more cowbell!" (one of the greatest SNL sketches ever)

The Ferrell/Smith challenge became so popular that two years later the pair reprised their famous drum-off for a good cause.

2016 saw Smith and Ferrell put on the Red Hot Benefit show, which saw the Californication rockers and a host of bands and comedians perform for one night only

Ferrell’s beneficiary was the Cancer for College organisation, while the drummer used the event to represent his bandmate Flea’s Silverlake Conservatory of Music charity.

Watch their epic rematch in Funny Or Die's video below:

Is the joke wearing thin?

Despite giving their fans what they want, it seems some won't let them forget about the resemblance... even when they're trying to do his day job.

Last year, a fan thought they'd Chad Smith's attention during a benefit gig at the Los Angeles Musicians Institute, by shouting out the comedian's name on stage.

At first glance the Dark Necessities rocker didn't take too kindly to the joke, and yelled "SHUT UP" before storming off.

However, returning on stage he addressed the fan again, asking: "Listen, are you a musician? You’re a drummer? Why did you say that?"

When the fan revealed it was because he loved him, Smith responded: “You love me and go ‘oh Will Ferrell!” I’m not Will Ferrell, you idiot”.

Four years on from their first drum-off, it appears that Chad Smith has just as much of a sense of humour as the comedy actor, as the pair seem to have become closer than ever.

The pair left audiences seeing double once again when they both took the stage at their a charity gig earlier this year.

These two might not have been separated at birth, but they definitely have a few things in common and are happy to do their bit when it comes to charity.

By The Way
Red Hot Chili Peppers
Download on iTunes

Red Hot Chili Peppers give update on their new album