This is how Manchester's Haçienda celebrated Christmas back in the 80s

Manchester legends New Order recorded a special festive song for the club's members… and we’re not sure what to think of it.

Back at Christmas 1982, New Order decided to give the patrons of their club The Hacienda a special festive gift: a free single!

Now, bear in mind that 1982 was way, way before the acid house and “Madchester” days that made the club famous. This is more your long-raincoated, gloomy post-punk era, at a time when the club would be half empty most of the time (see the film 24 Hour Party People for more details).

So the music on this festive freebie is more the experimental, electronic end as the group take on the classical pieces Rocking Carol (aka We Will Rock You) and Beethoven’s Ode To Joy. It’s lo-fi drum machines, sequencers and a whole heap of vocoder. Not the most Christmassy of singles, we’ll sure you agree.

Originally recorded for a TV piece to be used by Factory boss Tony Wilson on his Granada Reports TV new programme, it was later pressed up as a flexi and given away as a limited edition of 4,000 copies in a bag with a party hat and a streamer.

The 50 Greatest Songs From Manchester 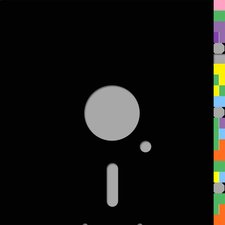