Mumford & Sons And More For The Felix Project Charity Gig

The indie-folk outfit will join the likes of Michael Kiwanuka, Daughter and Bear’s Den at Communion's intimate show.

Communion have announced a very special charity concert for The Felix Project featuring Mumford And Sons, Michael Kiwanuka and more.

The intimate event -  which will take place at St. Stephen's Church in Shepherd's Bush on 3 March - will raise funds for the organisation which provides "good food for good causes". 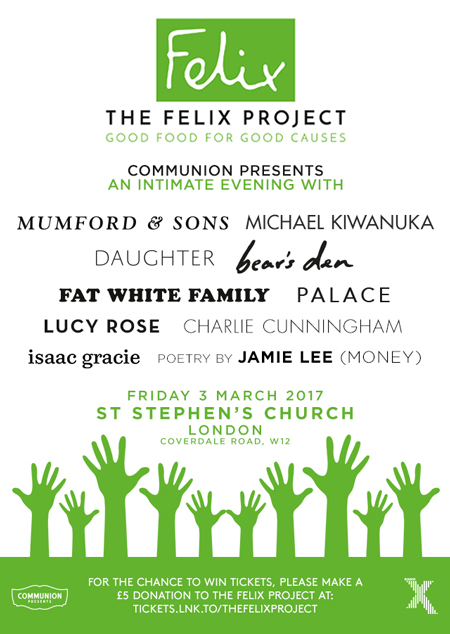 150 pairs of tickets will be available for the concert via a paid ballot, which can be entered from Friday 3-27 February 2017 for £5 each time.

Mumford and Sons’ Ben Lovett said: “We are really happy to have been asked to perform at St Stephen’s Church in support of The Felix Project. The premise of The Felix Project is one we stand by, not just in its redistribution of resource to those in need, but also in its effort to salvage some of the mindless wastage we create on a daily basis. It's going to be a fun night and will hopefully raise some money for a good cause.”

Sophie Napper fromt the charity - which takes surplus food from supermarkets and delivers it to 50 charities across Britain - added: “We are really excited about the show. It's going to be a fantastic night! All the money raised from the event will help The Felix Project continue to tackle food waste and food poverty and expand into new areas of London.”

Find out more about The Felix Project here.

Enter the £5 ballot for your chance to win tickets for the show here.

See more How To Listen