Friend of the show Aled Jones spoke to Chris Moyles this week and talked all things Walking In The Air ahead of the festive season.

This week on The Chris Moyles Show, Aled Jones featured as what will possibly be the last studio guest this year and things started getting very festive.

Aled might be most famous for his Walking In The Air single, but one of the most commonly identified misconceptions about the festive song is that he sings on the version for The Snowman as well.

However, did you know that the former choir boy wasn't ever really meant to record Walking In The Air as a single at all and it all sprung from a 30-second-stint he was meant to do for a Toys 'R'Us ad?

You'd also be right in thinking that the Howard Blake song made Aled Jones a household name. However, he was hugely successful in his own right releasing TONS of albums before he even knew the song existed. We don't think he got paid very much though...

Watch him explain all in his interview with Chris Moyles above.

Listen to our latest podcast for The Chris Moyles Show: 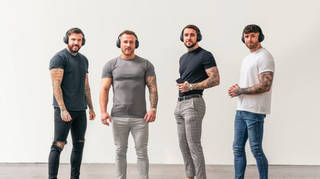