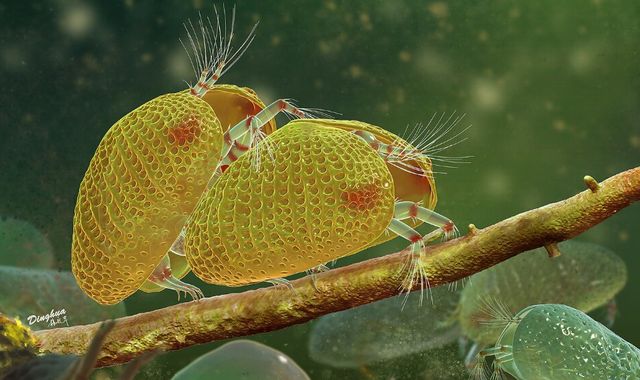 Perfectly preserved sperm dating back 100 million years has been found trapped in amber.

The sperm - roughly 50 million years older than the previous oldest fossil record - belonged to an ostracod, a class of small crustacean that has been in existence for 450 million years. It was found in modern-day Myanmar.

Based on the fossil record and the behaviour of modern ostracod, the male used their fifth limb to transfer extraordinarily long but immotile sperm into the female.

The sperm was enormous too, being about 4.6 times the length of the female's body.

"This is equivalent to about 7.3m (23ft) in a 1.7m (5.5ft) human," said Dr Renate Matzke-Karasz of the Ludwig Maximilian University of Munich.

Sadly for the two little critters, they were enveloped by tree resin while in the throes of passion.

This resin fossilised into amber, preserving not just the lovers but dozens of other ostracods.

Researchers from the Chinese Academy of Sciences were able to use X-rays to obtain high-resolution images of the remarkably well-preserved soft parts of the ostracods.

These images provided direct evidence of the male clasper, the sperm pumps, the hemipenes (they had two penises) as well as the female's eggs and seminal receptacles (they had two of these as well) which contained the giant sperm.

Fascinatingly, research has revealed that sexual behaviour in ostracods, which features a wide number of morphological adaptations, has remained pretty much unchanged over the past 100 million years.

There are a number of conflicting theories about what the evolutionary value of such long sperm would be, according to Dr Matzke-Karasz.

Whatever the mechanism, the findings reveal "that reproduction with giant sperm is not an evolutionary extravagance on the brink of extinction, but a serious long-term advantage for the survival of a species," Dr Matzke-Karasz concluded.