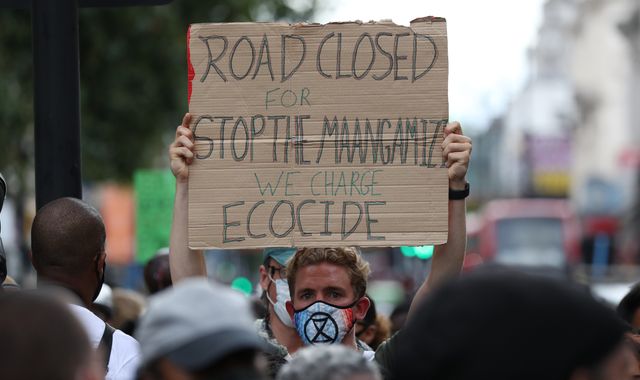 A group of people stopped traffic in south London as hundreds of others celebrated the end of slavery in British colonies.

Hundreds of people gathered in Brixton on Saturday for Afrikan Emancipation Day.

A large crowd stopped traffic and forced motorists to turn around on the A23 Brixton Road.

The annual event, held on 1 August, marks the passing of the 1833 Abolition of Slavery Act.

The act freed more than 800,000 enslaved Africans in most British colonies.

After other groups, such as environment protesters Extinction Rebellion, said they were planning to occupy the area, the Metropolitan Police imposed several restrictions on the event.

A number of conditions were imposed on the demonstrations within areas such as Windrush Square and outside Brixton Police Station, which included that the events must finish by 8pm and people should not walk in the roads.

The Met later described the event as "largely peaceful", adding three arrests were made.

All three remain in police custody.

Deputy assistant commissioner Laurence Taylor said: "The gatherings today have been largely peaceful and we thank our communities for working with us to ensure the voices of the community could be heard safely and done so responsibly to ensure the safety of all."

The Met said that the time limit was set so that officers could separate those attending the demonstrations from people attending other gatherings or unlicensed music events.

Antoinette Harrison, who lives in nearby Clapham, praised the "unity" of the event as she marched with her cousin and cousin's children.

On why she chose to join, the 38-year-old said: "We are tired. And I was just saying, our parents have gone through this, we're going through this, and I don't want our next generation to. It's got to come to an end."

A coalition of groups were involved in the event on Saturday, including Stop The Maangamizi: We Charge Genocide/Ecocide, the Afrikan Emancipation Day reparations march committee and the Rhodes Must Fall Oxford campaigners.

In a statement explaining why it was taking part, Extinction Rebellion said it was to raise awareness of its "Stop The Maangamizi: We charge Genocide/Ecocide!" petition, adding: "We need to pay more attention to Ecocide and raise our awareness of genocidal and environmental racism."