Trade deal 'not the be-all and end-all', says top US diplomat in UK 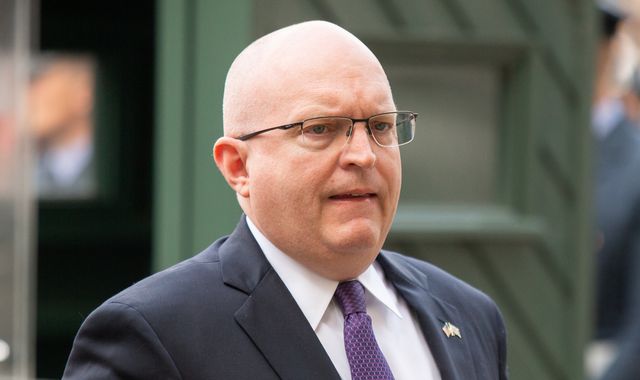 America's top diplomat in the UK has told Sky News that a comprehensive UK-US free trade deal is "not the be-all and end-all" of boosting trade between the two countries.

Speaking to Kay Burley, Ambassador Philip T. Reeker, chargé d'affaires at the US embassy in London, said: "I think the focus right now is on the trade that we do have.

"$220bn a year in goods and services, not to mention the $1.5trn in investment both ways that creates millions of jobs on both sides of the Atlantic."

Ambassador Reeker said this would be the focus while President Joe Biden concentrates on the US economy and emerging from the COVID-19 pandemic.

But he stressed: "I don't think we should focus on so-called trade agreements as the be-all and end-all."

Ambassador Reeker said the two nations were "working toward a number of new opportunities", citing an agreement on new rules for the import of lamb into the US from the UK as one example of progress.

"That's one small step. But again $220bn a year in two-way trade is a very important thing and we'll look to grow that," he added.

Asked how likely a deal was in the near future, the ambassador replied: "I think we just have to take things one step at a time."

His comments come in the wake of Boris Johnson's trip to the US, which saw him hold talks with President Biden in the White House and address the United Nations in New York.

During the visit, the prime minister appeared downbeat about the prospects of an imminent breakthrough on a comprehensive trade pact.

Mr Johnson said he wanted to make "solid incremental steps" in improving trade between the two countries, as well as telling reporters that President Biden has "a lot of fish to fry".

Questioned by Sky News political editor Beth Rigby about the prospects of a full trade agreement, Mr Johnson refused to commit to securing one before the next general election.

"The Biden administration is not doing free trade deals around the world right now but I've got absolutely every confidence that a great deal is there to be done," the PM said in a broadcast pool clip towards the end of the visit.

His comments this week differ markedly from what he said as foreign secretary back in 2017 when Donald Trump was US president.

At that point Mr Johnson asserted that the UK would be "first in line" for a deal.

There were awkward headlines for the PM when he was stateside after one of his ministers, Environment Secretary George Eustice, said Mr Biden does not "fully appreciate" the details of the row over the Northern Ireland Protocol and was "wrong" to have concerns about its potential impact.

The president had warned Mr Johnson during their Oval Office discussions that the dispute must not end in a "closed border" on the island of Ireland, with Mr Biden having previously stated that any impact on the peace process would scupper hopes of a trade deal.

Asked about Mr Eustice's comments, Ambassador Reeker said: "I think everyone would agree that the Good Friday accords, the Belfast Agreement, that brought and have preserved peace in Northern Ireland for decades now are vitally important. That's the president's point.

"There are ways forward to find a way through the Northern Ireland Protocol, which is of course separate from the Good Friday accords, that can make sure that the importance of those accords are preserved."

Pushed on whether the president understands the protocol, he replied: "I think he certainly does.

"He's made his point very clear that it's important to keep the Good Friday accords very much at the forefront and preserve that."