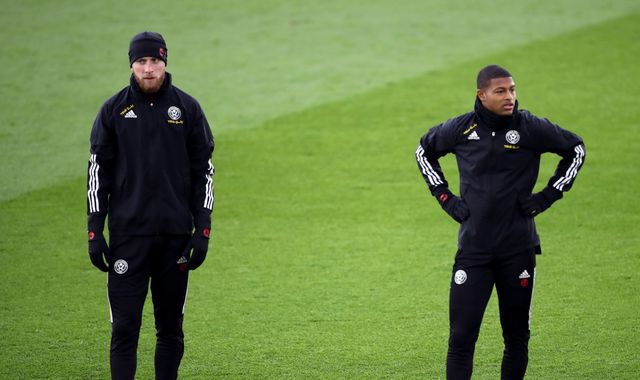 Two Sheffield United players have been charged with common assault over incidents at the end of their Championship play-off semi-final second leg against Nottingham Forest last month.

Rhian Brewster, 22, and Oli McBurnie, 26, were charged "in relation to disorder at the conclusion of a game at the City Ground on 17 May 2022", Nottinghamshire Police said.

They are due to appear at Nottingham Magistrates' Court next Tuesday.

In a statement, Sheffield United said Brewster and McBurnie "strenuously deny" the allegations - and that it was "disappointed" to learn they had been charged.

The club added: "Both players voluntarily engaged in interviews with Nottinghamshire Police in the aftermath of the fixture which saw their teammate, Billy Sharp, the victim of assault in the chaos which followed the final whistle."

Forest, who went on to earn promotion to the Premier League, won 3-2 on penalties after the tie ended 3-3 on aggregate.

Home fans then invaded the pitch in celebration, during which Blades skipper Billy Sharp was assaulted and a man later jailed.