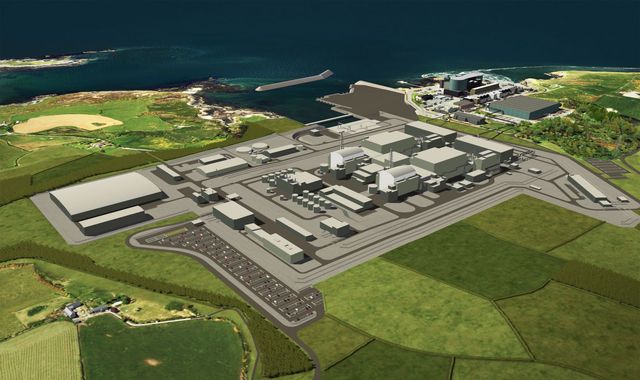 Plans to build two new nuclear power plants in the UK have been scrapped after Japanese backer Hitachi pulled out.

Work on the £20bn project - with one site at Wylfa in Anglesey, north Wales and a second proposed location in Oldbury, in south Gloucestershire - had already been suspended last year due to funding problems.

The scheme had been expected to create thousands of jobs and enough capacity to power 11 million homes.

Hitachi confirmed on Wednesday that it was finally pulling the plug, 20 months after the suspension, noting that the "investment environment has become increasingly severe due to the impact of COVID-19".

It had already written off £2.1bn spent on the plans. Hitachi had been involved in the project since 2012.

Horizon Nuclear, the Hitachi subsidy behind it, said: "Horizon will now take steps for the orderly closing down of all its current development activities, but will keep the lines of communication open with government and other key stakeholders regarding future options at both our sites."

Duncan Hawthorne, Horizon's chief executive, said acknowledged that the announcement would be disappointing but insisted that nuclear power "still has a role to play" in tackling energy needs, meeting climate change targets and creating jobs and green economic growth.

"We will do our utmost to facilitate the prospects for development which will bring the major local, national and environmental benefits that nuclear can uniquely deliver."

Tom Greatrex, chief executive of the Nuclear Industry Association, said: "Wylfa is probably the best site in the UK for new nuclear capacity, and has strong community and stakeholder support.

"It is imperative that a way forward is found for the site, to deliver thousands of jobs, hundreds of apprenticeships and millions of pounds of investment into an economic boost for the area while delivering secure, reliable and low-carbon power to underpin the UK's transition to net zero."

Shadow energy minister Alan Whitehead said: "The cancellation of what would have been the largest energy project in Wales, if it cannot be reversed, could have huge consequences including the loss of between £15bn and £20bn in investment.

"It will also prevent the creation of thousands of jobs in the energy sector and wider UK supply chain.

"We are already in the middle of an economic and unemployment crisis, yet the Government has been completely silent on the potential loss of this power station and the economic impact for Anglesey and the region.

"Ministers must urgently outline whether they plan to seek new developers to take on the Wylfa project, what conversations they have had with Hitachi about the site, and how they will ensure the people of Wales do not pay the price for Hitachi's withdrawal."

The Wylfa plant was expected to have provided 9,000 jobs at the height of its construction.

Once up and running by the mid-2020s it was set to create up to 850 permanent jobs, many of them highly skilled.

The government said it had previously offered "a significant package of potential support to this project that went well beyond what any government has been willing to consider in the past".

"We remain willing to discuss new nuclear projects with any viable companies and investors wishing to develop sites in the UK, including in north Wales," a spokesman said.