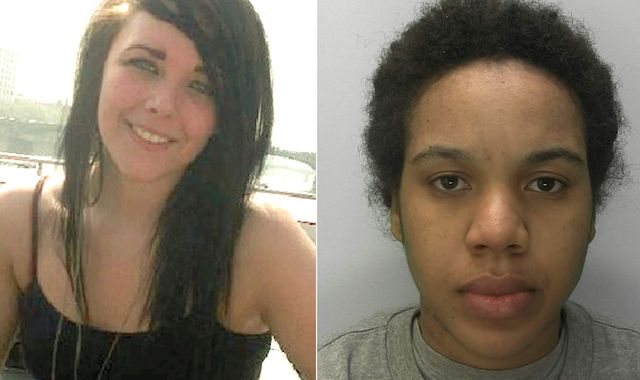 A woman who murdered and dismembered her friend after demands for a sexual relationship were rejected has been jailed for life with a minimum of 23 and a half years.

Gareeca Gordon killed Phoenix Netts at the Birmingham property where they both lived on 16 April last year.

Bristol Crown Court heard that Gordon stabbed Ms Netts four times, before cutting up her body with a circular saw she bought on Gumtree.

She was arrested by chance next to a Forest of Dean quarry a month later - with two suitcases containing Ms Netts' remains.

The killer pleaded guilty to the murder a few days before she was due to stand trial.

Gordon sent texts, voice mails and emails to Ms Netts' family to try to convince them she was still alive and had moved to London, the court heard.

Prosecutor Andrew Smith QC said the victim had told a friend in February that Gordon had "demanded sex with her" and became "aggressive" when she refused.

On 7 April , she texted a friend: "There's a girl here who keeps asking me to be sexual. I think I'm going to move back to London. It's scaring me lol."

"Phoenix confided in close friends that there is this unhealthy relationship that Gareeca was trying to form and that she didn't want any part of it," said Detective Superintendent Scott Griffiths, from West Midlands Police.

Bristol Crown Court also heard that Gordon had called the Samaritans on 11 April and appeared "tipsy".

"The clear focus of the call was Ms Gordon describing that she liked another woman and wanting to have sex with her," Mr Smith said.

Ms Netts' last-known contact was a phone call with a friend in the early hours of 16 April.

Internet searches including "how to fix punctured lung", "internal bleeding" and "can someone recover from getting stabbed" were made on her phone between 1.04pm and 3.07pm, the court heard.

She had been stabbed four times in her torso, but a post-mortem found she would have lived if she had received quick medical help.

Another woman in the shared accommodation heard drilling and banging, as well as shouts of "help me, help me", Mr Smith told the court.

Gordon paid £45 for a circular saw on Gumtree and the tool was delivered to the property on the morning of 17 April.

It was used to cut up the body while Ms Netts was clothed or partially clothed, according to the post-mortem.

"Dismemberment took place at five different locations of the body, dividing the body into six parts," the prosecutor told the court.

He said Gordon made several trips to the Forest of Dean and tried to burn the remains there.

She was caught when police were called to the Coleford area of the forest during the COVID lockdown on 12 May last year over reports a car was driving in the area.

It was then they discovered Gordon with the two suitcases. She was arrested when an officer opened one case and found a partially burned torso.

Forensic officers later found the carpet, bed, mattress and underlay had been removed from Ms Netts' bedroom, but discovered blood in the kitchen, shower and living area.

The circular saw was found in Gordon's room.

"Handwritten plans and notes concerned with her removing the body from Coleford and moving it to Wales to burn further" were also found, said Mr Smith.

The two 28-year-olds were both from London and had met when Gordon moved into the Birmingham property about six months before the killing.

"Gareeca even went on to the internet and downloaded an audio application which enabled her to edit some voice messages of Phoenix, to send those via social media platforms to a number of people, which confirmed that she was well and that she was alive," Mr Griffiths said.

The officer said Ms Netts' remains were kept in the Forest of Dean for weeks, with Gordon using trains and taxis to travel there from Birmingham.

Police believe she tried to burn the body, but when she "failed" put the remains back in the suitcases and had planned to take them to Wales.

Ms Netts was described as a keen horse rider as a child, fond of drama, and someone who did well at school.

She went to the University of Kent before a job and a new relationship prompted the move to Birmingham.

Prosecutor Andrew Smith told the court that Ms Netts' parents had made personal statements about the "profound" pain of their loss.

He said it was made worse for them by "the knowledge of the manner of her death and the defendant impersonating her".