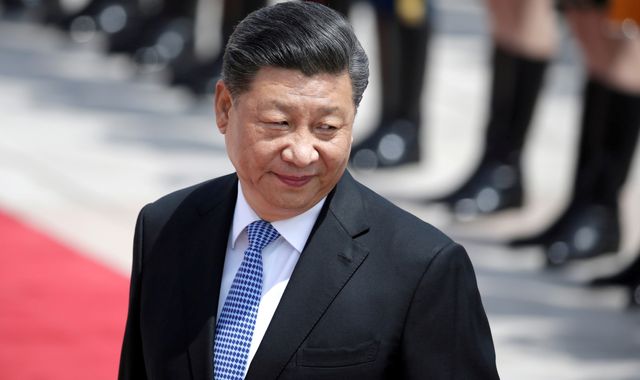 China's Xi Jinping is yet to commit to attending this year's climate change summit in Glasgow, COP26 President Alok Sharma has admitted.

Earlier this month, Mr Sharma held two days of talks in China ahead of the international summit being hosted by the UK in November.

But, asked on Sky News' Trevor Phillips On Sunday show if Chinese president Mr Xi had committed to being in Scotland for the gathering of world leaders, Mr Sharma said: "No, not yet."

He also admitted that China would be "key" to the climate change talks, as the country is one of the world's biggest polluters.

"There is no doubt that China is going to be part of the key to all of this," Mr Sharma said.

"They are the biggest emitter in the world.

"But we want to see the detail of that. That is what we are pressing them.

"They have said to me they want the COP26 to be a success. The ball is in their court.

"We want them to come forward and make it a success together with the rest of the world."

Mr Sharma said his recent talks in China had been "constructive and very frank" and included discussions on "cutting emissions and phasing down the use of coal".

"I said to them we want to see the detailed policy around this and they - along with every other major economy in the G20 - have committed before COP26 they will come forward with ambitious plans to cut emissions," he added.

Mr Sharma declined to rule out a new deep coking coal mine being opened in the UK in Cumbria - with the proposal currently the subject of a public inquiry amid protests from environmental campaigners.

But he insisted Britain was viewed as "leading in the world" in the reduction of coal use.

"There is a reason that in our democratic processes we have public inquiries where everyone gets a chance to have their say," he said, when asked about the Whitehaven plans.

"And that inquiry is still running so let's see what comes out of that, what the inspectorate say to that.

"But I go back to this point about coal, that we are actually seen around the world as a poster child when it comes to a clean energy transition and we have built the biggest offshore wind sector in the world, there is no doubt about it.

"Coal will be history in 2024 in our electricity mix."

Subscribe to ClimateCast on Spotify, Apple Podcasts, or Spreaker

Labour shadow minister Pat McFadden said he was "reluctant" to comment on the Cumbria coal mine application, but that "the direction of travel must be that we do decrease our reliance on fossil fuels, we increase our use of renewables".

"The bar should be high for that and there has to be a very convincing case given the overall arc of where we've got to get to on 2030 [when the UK has committed to cutting emissions by two-thirds compared to 1990 levels]," he added.

"So I don't think these things should be approved just on the nod in the way that they would have been in the past because that's not the future."

Green Party MP Caroline Lucas said it was "absolutely essential" that China had a presence at the COP26 summit, as she expressed her concern that a new security pact between the US, UK and Australia had "just enraged the Chinese even more".

"If COP26, if these climate talks are our top diplomatic priority, then everything else should be taking second place to that, so I'm deeply worried about relations with China," she told Trevor Phillips On Sunday.