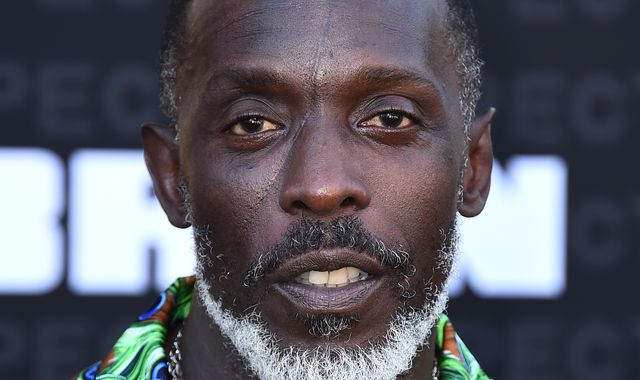 The Wire actor Michael K Williams has died at the age of 54, police in New York say.

Williams, who was known for his role as Omar Little in the hit TV crime drama, was found by family members at his Brooklyn home at around 2pm on Monday.

His death is being investigated as a possible drug overdose, the Associated Press reports, citing the New York Police Department (NYPD).

When contacted by Sky News, an NYPD official said they couldn't confirm the presence of drugs and that the medical examiner would establish Williams' cause of death in due course.

The multiple Emmy nominee earned nods for his roles in Bessie, The Night Of, When They See Us and, this year, HBO's Lovecraft Country.

The Brooklyn-born actor, who had a distinctive facial scar from a bar fight on his 25th birthday, also won fans for his role as Chalky White in the period gangster series Boardwalk Empire.

"It is with deep sorrow that the family announces the passing of Emmy nominated actor Michael Kenneth Williams. They ask for your privacy while grieving this unsurmountable loss," his long-time representative Marianna Shafran of Shafran PR told The Hollywood Reporter.

Filmmaker James Gunn also paid tribute to Williams, describing him as among the "most gentle souls I've ever met".

He tweeted: "Michael K Williams, in addition to being one of the most talented actors around, was also one of the kindest, sweetest, most gentle souls I've ever met. This is heartbreaking. My thoughts are with all those who loved him."

He was set to play Doc Broadus, who was Foreman's trainer and mentor.

Fellow actor Wendell Pierce, who played Detective Bunk Moreland in The Wire, tweeted: "The depth of my love for this brother, can only be matched by the depth of my pain learning of his loss.

"An immensely talented man with the ability to give voice to the human condition portraying the lives of those whose humanity is seldom elevated until he sings their truth."

And fellow co-star Isiah Whitlock Jr tweeted that he was shocked to learn of the actor's death.

"Shocked and saddened by the death of Michael K Williams. One of the nicest brothers on the planet with the biggest heart. An amazing actor and soul. May you RIP. God bless," he wrote.

Williams' film roles included parts in The Road, Inherent Vice and the Oscar-winning 12 Years A Slave.

But audiences will best remember him for Omar, the gay, morally ambiguous criminal who frequently targeted drug dealers in a distinctive duster jacket on the streets of Baltimore.

Even former president Barack Obama was a fan of the HBO character.

In 2012, he said Omar was his favourite, saying "that guy is unbelievable" in reference to Williams' portrayal.

David Simon, creator of The Wire, posted a picture of the actor to Twitter and wrote: "Too gutted right now to say all that ought to be said. Michael was a fine man and a rare talent and on our journey together he always deserved the best words. And today those words won't come."

In its statement, HBO described Williams' death as an "immeasurable loss".

Oscar-winning filmmaker Spike Lee, 64, who like Williams grew up in Brooklyn, shared a picture of himself and "my brother" together.

He wrote on Instagram: "Our Brother Passed Away Today In His Home, Da People's Republic Of Brooklyn. I'm Shook. Drinking A Bottle Of Italian Red Wine-Brunello Di Montalcino By Myself. Our Greats Are Leaving Us Left And Right. GOD BLESS."

She tweeted: "I felt so lucky to have known him, and we were all so fortunate to have enjoyed his incredible talent. He burned so very bright. Rest in power, MKW. You will forever be The King."

He said: "A lot of people knew him as Omar, I knew him as Chalky. I'm sure his family knew him as Michael. Thanks for all you gave to encourage, enlighten and entertain people you didn't even know. Praying for your people."

The National Association for the Advancement of Coloured People (NAACP) posted on Twitter: "Rest in power to our friend and actor."

Williams was born and brought up in East Flatbush, Brooklyn. He told the New York Times he had a hard time having been molested as a child and going on to develop a drug problem.

He started out in music videos and landed a role as a drug dealer in Martin Scorsese's 1999 drama film Bringing Out The Dead.

He then had a small part in The Sopranos before making his name in The Wire, which he starred in throughout its run until 2008.

Anyone feeling emotionally distressed or suicidal can call Samaritans for help on 116 123 or email jo@samaritans.org in the UK. In the US, call the Samaritans branch in your area or 1 (800) 273-TALK.