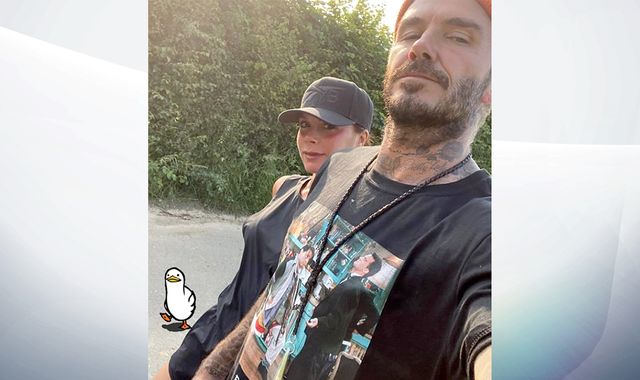 Friends star Matthew Perry has given David Beckham's style his stamp of approval, after the ex-footballer shared a photo of him in a Joey and Chandler T-shirt.

The former footballer shared the snap of his countryside stroll with wife Victoria on Instagram, writing: "Afternoon walk", followed by a heart emoji.

While David normally opts for rather formal countryside attire (his penchant for a tweed flat-cap is well known) his appreciation of the long-running US sitcom had prompted a rather more casual look.

The selfie, which showed him wearing a black T-shirt with a still from the show, was quickly liked over 2m times.

The season three scene is a favourite among Friends fans, from the episode "The One Where No One's Ready".

In it, a naked Joey (played by Matt LeBlanc) puts on all of Chandler's clothes to pay him back for stealing his underwear.

It spawns Joey's famous line: "Look at me, I'm Chandler. Could I be wearing any more clothes?"

Among those loving David's work was Perry, who re-shared the post on his own feed, writing: "This guy has really good taste. Whoever that is."

Perry quickly followed his comment up with "Guys, I know who it is! I was just joking."

David's family got in on the action too, with his 15-year-old son Cruz seeming to take the credit for the top, writing under his dad's post: "Guess who bought him the shirt".

Fashion focused Victoria was less interested in the top, and more worried about her husband's choice of accessories, commenting: "Nice necklace super bold!", followed by the embarrassed face and crying with laughter emojis.

Others were also quick to get in on the fun, with one fan site writing under Perry's post: "He's sexiest man alive!!! the other one is David Beckham."

While another, Gill Foley, punned: "Friend it like Beckham".

David is not the only fan of the show in his family, and just last month shared a photo of him and his eight-year-old daughter Harper wearing matching Friends hoodies.

He said the eight-year-old had surprised him with the gift, adding Joey's famous catchphrase: "How you doin?"

Courtney Cox, who is friends with David, commented on the snap at the time, writing: "Aww so sweet!".

David and Victoria have become countryside royalty of late, sharing plenty of snaps of them walking around country lanes and fields during lockdown.

The family have spent the last few months isolating at their Cotswolds home, minus their eldest son Brooklyn who is in America with his girlfriend, pursuing a career in photography.