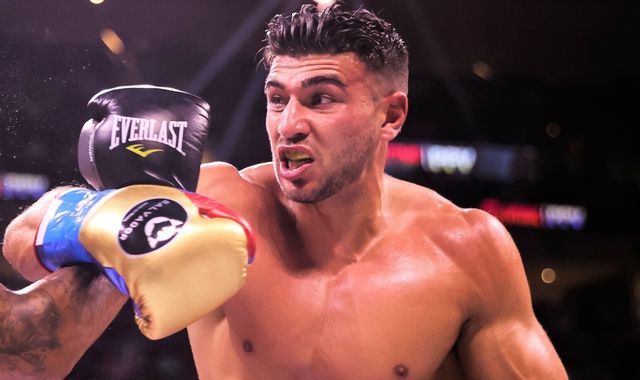 Tommy Fury’s grudge match with Jake Paul is being negotiated and his promoter Frank Warren says “I think it’s going to happen”.

The younger brother of WBC heavyweight champion Tyson Fury and the YouTuber-turned-boxer began their rivalry in a series of social media spats which escalated into challenges to settle it in the ring.

"Until they are signed, we know it doesn't mean anything.

"If it happens, it will be in the States.

"I think it's going to happen. We're not far off doing it."

Fury recently won his US debut on the undercard to Paul's best win yet, against former UFC champion Tyron Woodley.

They were involved in a furious backstage confrontation when their paths crossed.

Fury's older sibling, the heavyweight champion, weighed in on this rivalry by claiming that he would make Tommy quit boxing if he failed to beat Paul.

This prompted Paul to up the ante - he proposed a bet that, if he lost, he would pay Fury an extra $500,000 but if Fury lost he must change his name to 'Tommy Fumbles' for a year.

Warren joked: "Part of the contract is that we've got to decide what the other guy has to change his name to!

"That will have to be replicated."

Paul has won all four of his fights since swapping the online world for the boxing ring.

Fury, who found fame on Love Island, is undefeated in seven.

"They are both novices," Warren said. "Tommy has had seven fights, the other guy four.

"Tommy has a lot to learn. He has to learn his craft. His last amateur fight was when he was 15.

"But if he can earn the money that he would earn from this fight? Who am I to stand in the way? It's life-changing.

"What Jake has done is phenomenal. He has managed to monetise this.

"The place was rammed [when Fury and Paul boxed on the same night]. The crowd got there at 7pm and watched every single fight.

"We had Daniel Dubois on the show.

Warren predicted about Fury vs Paul: "It will be real fun, the press conferences and everything. They are both witty guys.

"The fight itself? I fancy Tommy to be too much for him.

"Let's get it signed and we'll find out."

(c) Sky Sports 2021: Tommy Fury vs Jake Paul ‘not far off’ says promoter Frank Warren who is 'sorting contracts out' Brexit: This French town with the sea in its heart shows why the fishing dispute won't just blow over