The Hundred has 'set a statement' with women's opener, says Ebony Rainford-Brent 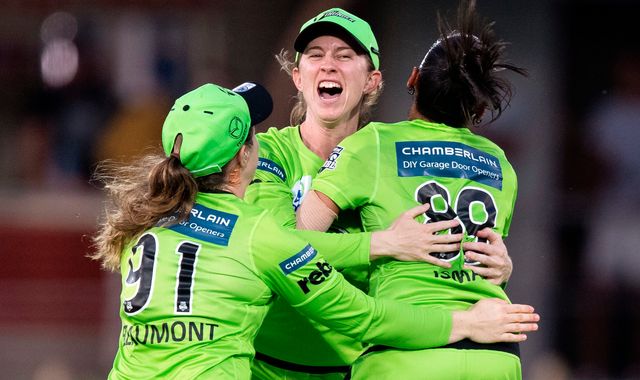 Former England international Ebony Rainford-Brent thinks The Hundred has set out a "statement" with the historic decision to start the tournament with a women's match.

In a first for a major UK sporting event, Oval Invincibles will face Manchester Originals in a women's game to start the inaugural edition of The Hundred on July 21.

The men's and women's competitions will then be played alongside each other, with all games live on Sky Sports.

"It's amazing news," said Rainford-Brent on Sky Sports News. "Men and women competing side by side, the women play the first game and that sets a statement.

"Women's sport has been put on the backburner a bit over the last 12 months because of the pandemic and this is a real chance for young boys and girls to turn on the TV and see something exciting and the women are really going to drive it. It's a fantastic message to start the tournament."

Australia captain Meg Lanning will be playing for Welsh Fire, having enjoyed plenty of success in the Women's Big Bash League.

She hopes The Hundred can replicate the success that the WBBL has had Down Under.

"Hopefully there will be a lot of young girls watching and seeing their idols playing and in the spotlight. I know all the players are really excited to get involved.

"The WBBL has played a massive role here in Australia in preparing players to play international cricket and new situations and pressure situations. I have no doubt The Hundred will do the same. The quality of players shows how good it is going to be and how much work has gone into it."

As well as starting with a women's game, The Hundred will also offer equal prize money to men and women.

"I think it's great and shows how much the ECB rates women's cricket and wants to make it work," said Lanning.

"And for the young girls watching to be able to get that message across that there are good opportunities to play cricket and if you do get to that elite level you are on the same footing as the men. I think it's a really important message to send so it's a great thing the ECB are doing."

England international Sophie Ecclestone, who will be playing for Manchester Originals, believes the decision to start with a women's game is "massive for women's sport".

"It's big for Manchester and the girls will be so excited and I can't wait to get going and it will be a great tournament for women's sport."

England's Ben Stokes also thinks it is a "great thing for the game".

"What the women have achieved over the last five or six years has been amazing.

"Our performances on the pitch are what we get judged on, but what resonates through both the men's and women's game is we want to inspire the next generation of cricketers, young boys and girls, to play."