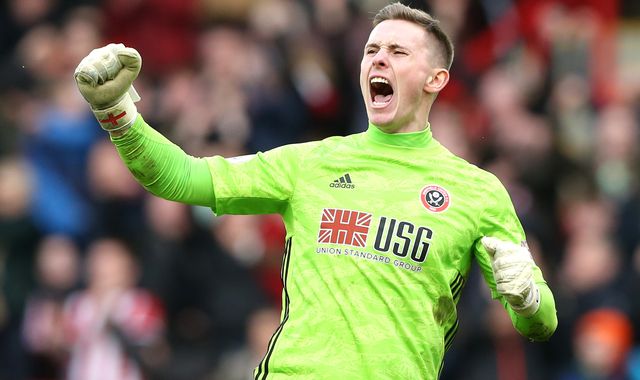 Dean Henderson will remain at Sheffield United until the end of the season after Manchester United agreed to extend his loan.

The 23-year-old goalkeeper was due to return to Old Trafford upon the expiry of his temporary deal on Tuesday, but he will now remain at Bramall Lane until the conclusion of the extended Premier League campaign.

Sheffield United manager Chris Wilder said last week he was confident an agreement could be reached and following prolonged talks, the club confirmed the news on Monday.

A club statement read: "Chris Wilder has finalised his squad for the remainder of the current extended Premier League campaign.

"Goalkeeper Dean Henderson will remain at Bramall Lane until the end of the season, after a deal was struck with Manchester United following prolonged discussions between the respective parties in recent weeks."

Henderson has performed brilliantly for Sheffield United during their first season back in the Premier League - keeping 11 clean sheets in 29 games - and was called up to Gareth Southgate's senior England squad in October.

After helping the Blades to Championship promotion last season, Henderson signed a new contract at Old Trafford in the summer and has been tipped by Ole Gunnar Solskjaer to become Manchester United and England's future No 1.

Speaking last week, Solskjaer said: "It's a different job to be playing for Sheffield United and for Manchester United. He's got different roles and for me, the two years he's had have been fantastic development.

"And as the stats show he's proved worthy of quite a few points. He's learning all the time, he's a passionate 'keeper that wants to be the best, he's developing, he's got good coaching there and, I've said it before, one day he'll be England No 1 and Man Utd No 1 and it's up to him to keep developing."

'Henderson ready to be Man Utd's No 1'

Norwood, himself a United academy graduate, says Henderson has what it takes to eventually make the step up.

"Definitely, he's proven himself this season, he's up there with most clean sheets in the league so he's obviously doing something right," Norwood told Sky Sports.

"I've read a few things from different people and I do agree that there would be a lot more pressure on him going and playing as Manchester United's No 1 rather than Sheffield United's - the scrutiny he would be under being England's No 1 as well.

"I'm sure Hendo can handle that. He's sure of himself, he's very confident."

Sheffield United also confirmed Dutch forward Richairo Zivkovic will remain in South Yorkshire until the conclusion of the 2019/20 campaign, after a deal was agreed with his Chinese parent club Changchun Yatai.

Phil Jagielka, Jack Rodwell, Kieron Freeman and Leon Clarke have also agreed contract extensions to their deals, which were due to expire at the end of this month.

However, two players who will not feature again for the Blades this season are midfielder Mo Besic, who has returned to Everton, and defender Panos Retsos, who will head back to parent club Bayer Leverkusen.