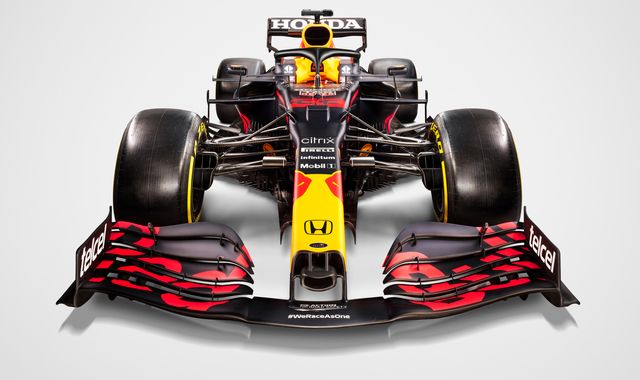 Red Bull have revealed the first images of the car they hope will propel Max Verstappen and new signing Sergio Perez to a 2021 title challenge as F1's perennial challengers bid to end Mercedes' dominance.

The new car, the RB16B, provides Red Bull's latest hope of returning to the front for the first time since 2013, on the back of finishing a distant second behind seven-time world champions Mercedes last season.

And Red Bull are going all out for a closer battle in 2021.

Not only have the team signed the experienced yet hungry and in-form Perez to partner star driver Verstappen, but this is Honda's last season in F1 before they hand over their engine project to Red Bull from 2022.

Honda, who have improved in recent seasons but slipped well behind a power-hungry Mercedes last year, are targeting increased straight-line speed to aid Red Bull and their usually nimble car.

The RB16B, as hinted at with the name, is based on the genes of Red Bull's last car with the team keeping their characteristic thin nose and familiar rear wing design.

But with F1's new regulations described as subtle yet potentially "significant", Red Bull do seem to have made big changes to their new challenger - particularly to the sidepods as they bid to recover downforce and overhaul Mercedes.

The RB16 from 2020, while improving over the year, was often a handful and unpredictable for the drivers and so improving driveability and consistency were key targets for the team over the winter.

Can Verstappen and Perez fight Mercedes with new car?

The fourth team to launch their car ahead of the new season but the first to do so with just digital images and no drivers present, Red Bull gave little away about the changes to the car, or hopes for the season, on Tuesday.

But they did make it clear that the RB16B "aims to carry the momentum of 2020 into the new season in a bid to fight for this year's title".

Last season, Red Bull started the year around half a second per lap down on Mercedes before winning two races through the year, most impressively, and encouragingly, at the season-ender at Abu Dhabi as Verstappen stormed away from his rivals.

Although whether that victory was as much to do with Mercedes stalling development as Red Bull's improved pace will be found out this season.

What Red Bull do know is that they are armed with, along with Lewis Hamilton, the sport's fastest and most consistent driver in Verstappen, the 23-year-old who continues to show title-challenging potential but has yet to be handed the package to fight at the front throughout a campaign.

The team should also be boosted by the arrival of Perez, who replaces Alex Albon for 2021.

Verstappen was fighting Mercedes alone for the majority of last season with Albon often unable to get out of the midfield, and the minimum expectation for Perez will be to assist Verstappen in taking on Hamilton and Valtteri Bottas.

After eight seasons with Force India/Racing Point following a solo campaign with McLaren, Perez finally gets another chance at a top team - which his performances of recent seasons have thoroughly deserved.

The 31-year-old's best F1 season to date came last year, which was capped with a superb maiden F1 victory at the penultimate race in Bahrain.