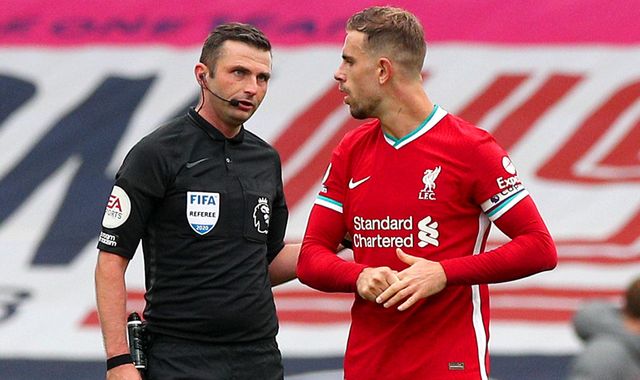 Liverpool are understood to have asked the Premier League to investigate the application of VAR in two controversial decisions during their 2-2 draw at Everton on Saturday.

The Premier League champions were denied a derby-day win when Jordan Henderson's stoppage-time strike was ruled out for a borderline offside against Sadio Mane.

Liverpool were also unhappy that no action was taken against Jordan Pickford after the Everton goalkeeper's knee-high challenge on Virgil van Dijk in the opening minutes. Van Dijk had to be replaced and was sent to hospital for a scan after the game.

Liverpool are understood to have asked the Premier League to investigate why Pickford's tackle was not looked at by the VAR official, David Coote, as well as to explain how Mane was adjudged to have been offside for the disallowed Henderson goal.

Liverpool have also queried at which point Coote decided to freeze the frame to assess the Mane offside.

Jurgen Klopp was furious with the officials' decisions after the game, saying: "I came into the dressing room and there were people standing there saying they'd watched the [VAR disallowed goal] situation back and they were saying they didn't understand why they whistled offside.

"I'm really in support of VAR and especially with offside you expect that the right decision would be made. We scored a goal one time at Aston Villa and they said the armpit was offside! It sounds funny, but we got it.

"This time, the picture I saw once was that there wasn't an armpit call, it was just offside. Since then, I've had about 10 interviews and everybody tells me that it was not offside and this doesn't lift my mood, obviously.

"It's tricky, but we've lost one player in a situation where VAR was not involved [Pickford on Van Dijk] and maybe another one in the red card situation [Richarlison on Thiago Alcantara], and we've scored a legitimate goal which didn't count. It was obviously not our day but it was the performance I wanted to see."

"It must be offside with VAR, it's what everyone wants," Henderson said after his injury-time effort was ruled out.

"I think they bend the lines sometimes to make it offside. I'm not sure how they do it, I've seen it before.

Klopp: Pickford challenge should have been looked at

Klopp was also in no doubt that England goalkeeper Pickford's challenge on Van Dijk should have been reviewed by the VAR.

He said: "In the game, that was pretty quick. For me it was a clear penalty that I saw. Then obviously we saw the flag went up, so offside. I still thought it was worth a look on the foul but that didn't happen.

"We have no power there, we just sit here and you discuss it with me. You have to ask other people about that, not me. What can I say?"

Richarlison issued an apology to Liverpool's Thiago Alcantara on Saturday evening for his challenge on the midfielder.

Thiago eventually got up from Richarlison's red-card tackle and created the opening for Henderson's late disallowed goal, but later reported an injury.

"Everyone who knows my background knows that I was never a violent player," Richarlison said in a statement, blaming his heavy lunge on "sheer over-dedication".

"I did not enter that dispute with the intention of hurting Thiago... I already sent a message to him apologising and I also do it here publicly.

"I hope he hasn't been hurt and that everything is fine."

There may not have been fans in the stands but Everton and Liverpool served up a classic Merseyside derby in their 2-2 draw at Goodison Park. But there were three key moments which fans from both sides will be talking about for a long time to come.

Sadio Mane got Liverpool off to a flying start with his finish on three minutes but Jordan Pickford's bad challenge on Virgil van Dijk - which forced the defender off but saw the keeper escape punishment - was a pivotal moment on six minutes.

Michael Keane pulled Everton level midway through the first half and after Mohamed Salah's super strike on 72 minutes, Dominic Calvert-Lewin continued his incredible scoring streak with another Everton equaliser 10 minutes from time.

But there were more twists to come with Richarlison shown a red card for a bad challenge on Thiago after referee Michael Oliver had blown his whistle for a foul by Yerry Mina on Mane, before the Liverpool forward was controversially adjudged offside in the build-up to Jordan Henderson's injury-time strike.