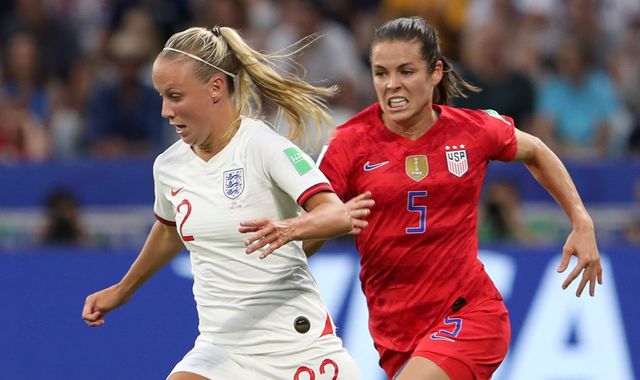 Beth Mead admits her scintillating club form so far this season is down to "playing angry" after the disappointment of missing out on the Olympics this summer.

The Arsenal winger has already registered three goals in the opening two WSL games, leading to a call-up to Sarina Wiegman's first England squad for the World Cup qualifiers against North Macedonia and Luxembourg.

It comes after the 26-year-old was not only overlooked for Team GB in the summer but also Hege Riise's Lionesses squad back in February.

"I've said in the past I sometimes play better when I am angry, and to some extent I have started the season like that with Arsenal," Beth Mead said.

"I've channelled my disappointment at not being selected for the Olympics in the right way, got my head down in pre-season and it's showing on the pitch.

"Sometimes you question what you are doing and what you could perhaps have done a bit differently but it's part and parcel of football.

"But I've started to believe in myself again and I don't know if somewhere it motivates me to prove people wrong but I'm doing my best to do that so I'm never in that position again.

"It's a fresh start with Sarina (Wiegman) now in charge of England and I've just got to put the work in to prove why I was the winger who played in a World Cup semi-final."

Mead has also had to contend with additional competition for places in Jonas Eidevall's new-look Arsenal side with the summer signings of Nikita Parris and Tobin Heath.

However, instead of being daunted by the prospect, it has given Mead even more impetus to kick on this season.

"I've always been a player who has thrived off competition and I think with Nikita (Parris) and Tobin (Heath) coming in, it's helped to bring my game to a new level," Mead added.

The Barclays FA Women's Super League has a new home this season on Sky Sports with up to 35 games shown exclusively live. The deal covers the next three seasons and has seen the WSL added to Sky Sports' flagship offerings.

From world-class stars like Lucy Bronze and Vivianne Miedema, to the endless rivalry of the 'big three' - Arsenal, Chelsea and Manchester City - there are plenty of reasons to be excited for the 2021-22 season on Sky Sports.