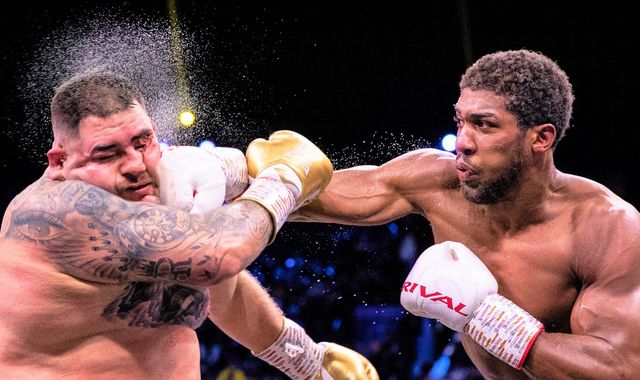 Anthony Joshua deserves a homecoming fight but needs to bring back the 'aggression' to reassert his dominance, says Carl Froch.

Britain's heavyweight star could make a triumphant return to these shores after regaining his world titles in a masterful points victory over Andy Ruiz Jr in Saudi Arabia.

Joshua is awaiting news on his next fight after being ordered to fulfil title defences against Kubrat Pulev and Oleksandr Usyk, his IBF and WBO mandatory challengers, and Froch remains hopeful that Joshua will not be forced to vacate one of his belts.

"In an ideal scenario, you want to keep all the belts, because it would be nice to see AJ as undisputed champion," Froch told Sky Sports." I think the heavyweight division needs that one champion. I know Tyson Fury and Deontay Wilder are fighting in February, but I would like to see AJ at some point get hold of that WBC title.

"If he has to fight Pulev and then Usyk, so be it. I'm a boxing fans as well as a Sky Sports analyst, so I want to see him fight Usyk.

"But I think we need to see Usyk in with a decent heavyweight first - and Derek Chisora is that decent heavyweight. Chisora can show us if Usyk can last with somebody who can punch hard, who comes forward and is strong. He's not been punched yet on the chin by a big lump.

"Pulev is a decent name, he's a good opponent, and it would be nice to see a homecoming fight in Britain after his rematch win over Andy Ruiz Jr in Saudi Arabia. Could it be Wembley, Cardiff, or Tottenham Hotspur Stadium?"

Pulev might have emerged as the front runner to face Joshua, with the IBF confirming that both fighters have until January 31 to agree a deal.

And Froch believes Joshua should seek an explosive win over Pulev to banish any lingering doubts after his first defeat to Andy Ruiz Jr - and then target a blockbuster battle to end 2020.

"I would like to see AJ box and move against Pulev, but I want to see a finish. At some point, whether it'd mid-to-late or even in the last round, I want to see Joshua stand in front of him and let the shots go.

"End the fight aggressively and try to really finish Pulev off. That shows me that he's not concerned about engaging following the loss to Andy Ruiz Jr. I want to see a bit of aggression. A boxing masterclass with a finish.

"We still need Joshua against the Wilder-Fury winner by the end of the year, but if we don't get it, then I'm equally as happy to see Dillian Whyte in there with AJ. That's a tough fight, if Whyte is at his best.

"If Whyte produces a couple of performances this year, similar to that win over Oscar Rivas, then it would create real excitement going into a fight with Joshua."