The Crown's Charles and Diana: 'Hopefully people won't hate them too much' 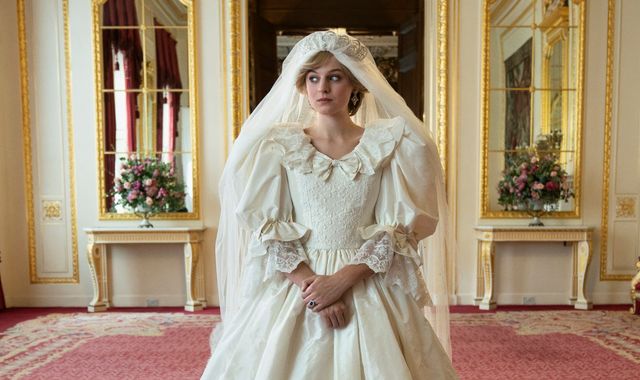 The Crown has taken on royal births and deaths, national crises and personal scandals, and seen prime ministers come and go.

But now, as the big-budget drama enters the glamour of the 1980s, the era of Diana and Margaret Thatcher - two of the most talked about public figures of the century - things are about to get even more interesting.

A relative unknown, 24-year-old actress Emma Corrin enters the fray as Lady Diana Spencer, the future People's Princess, a role that is almost certainly set to turn her into a household name when season four of The Crown launches in November.

Idolised, criticised, heavily scrutinised, Diana's memory is forever tied to the fall-out following the breakdown of her relationship to Charles, and the controversial circumstances of her death; millions feel they know her story, making it a huge role to take on.

"It's incredibly daunting," Corrin tells Sky News, in a Zoom interview alongside her on-screen royal husband, both looking decidedly less royal and far more relaxed chatting from their sofas rather than the regal Crown sets.

Did she think about the possibility of Harry and William watching when she took on the part?

"I try not to think about whether people watch it because I think that's a slippery slope," she says. "You can't really control if they do and also if you start thinking about, 'I wonder what they'll think'... It's kind of, yeah, it's quite stressful."

When Diana died in hospital in Paris in the early hours of 31 August 1997, following a car crash, Corrin was just a baby. Taking on the role, she wanted to make sure she had done her homework, she says, on top of the hours put in by researchers for the show.

"Basically what I learnt quite quickly is that - because I tried to do a lot of research and read a lot of biographies, a lot of newspapers, footage and records of Diana - and the issue is that when you're looking at that kind of thing, it's very one-dimensional and you're getting tabloid news, really, it's all very factual," she says.

"And then I got the scripts through about a month after I got the part and that really helped because suddenly I had a story, I had a context."

Many fans of The Crown may be able to suspend judgment as to what is fact and what is fiction, others no doubt believe every word on screen is as it played out.

Having the script in front of her served as a reminder that the series is a work of fiction, says Corrin, putting the pin in the bubble, all expertly crafted by creator Peter Morgan.

"This is a drama, this is Peter's version of events," the actress says. "We use these real-life people as a jumping off point to tell a story that is really…

"I think the crux of The Crown is, look at these icons, look at these figureheads who we think we know. Oh, wait, actually, behind that, behind the closed doors is all this human experience. And I really think it's the most fascinating thing to examine these people who are in the most extraordinary circumstance, the strangest kind of existence, and to see the nuances of what they go through.

"So yeah, I guess the pressure and feeling overwhelmed by [Diana] being such a public figure sort of disappeared when I realised it was my interpretation of her, I suppose, that was going to be shown."

We have already seen glimpses of Corrin's Diana in beautifully shot, lavish-looking photographs and a trailer teasing fans ahead of the launch - a picture surrounded by paparazzi, one coyly looking at the camera, head tilted, and of course, a dramatic shot in the wedding dress; significantly alone, those famous puffed shoulders bulking her small frame, huge train fanning out behind her.

The wedding that Charles is shown to never have wanted, Wednesday 29 July 1981, is such a pivotal moment in the couple's story - yet Corrin's time dressed for her big day on screen is fleeting (despite the hours that must have gone into getting that dress just right). Because we know what happened as the world looked on; what The Crown does best is the filling in of the gaps - what happened, or its version of what happened, behind closed doors.

We see Diana in the run-up to the celebrations: celebrating her engagement with friends; dancing to Stevie Nicks; alone and lonely in Buckingham Palace; struggling with bulimia.

In one scene, she is roller-skating through the palace - "I think she [really] did do that," says Corrin - Duran Duran's Girls On Film blasting on her Walkman. Moments like these were the ones the actress says she really wanted to reflect.

"Do you know what, it was that kind of thing, it was the roller-skating, the sense of fun that she obviously had before she became royal and that she kind of maintained, that I think was quite rare," she says.

"Roller-skating through Buckingham Palace is a great example. Also, the dancing, her dancing and how much that meant to her, and how she used that as a kind of form of expression. I really loved discovering that."

O'Connor, who already has one series behind him, sidesteps the question of considering the real Prince Charles, or Harry and William, potentially watching him in the role. Instead, he says he would not have wanted the part had the series been about copying what we see of the royals.

"I wouldn't have been massively interested in doing it I don't think, if we were doing some sort of mimicry or keeping too much to the real people, because The Crown isn't that," he says. "I mean, what's interesting about The Crown is the stuff we don't know, and it's the fiction, it's the speculation of what happened behind the closed doors...

"There's a great film by Todd Haynes called I'm Not There, which is about Bob Dylan, and it's eight actors playing versions of Dylan, and it's all versions of his personality, not really Bob Dylan. And the reason it's so good is because we all know what Bob Dylan looks like and how he talks, in public. But that's not interesting, I have no interest in watching that.

"What's interesting is the speculation, what could he be like in real life? How does he exist? What were his relationships like? And so that's what, to me, it was kind of… you get the little gestures, doing that (he pretends to adjust his cuff, a la Charles) and the pointed out neck and all that stuff, and then beyond that it's just about telling a real story and being true to the character in the script, really."

In one scene, we see Diana being taught the rules of becoming a royal. The "ferocity" of the regulations surprised her, Corrin says.

"I hadn't really appreciated that there are so many things, so many different things that don't really make any sense," she says. "They're just silly royal traditions, that you're thinking, why do you still do this? It's mental. But very interesting to learn."

In this series, we see more of Charles's relationship with Camilla Parker Bowles, who befriends Diana.

Does O'Connor sympathise with his character? "Yeah, for sure," he says. "Hopefully people do."

During season three, when Diana wasn't in the picture and viewers watched Colman's Queen sabotaging her eldest son's relationship with Parker Bowles, people would tell him how sorry they felt for Charles "and how awful it must have been, and God, he was really treated badly and he's so sweet and kind", O'Connor says.

Now that Diana has entered the timeline, it's a different story.

"Now… they've forgotten all that and they're like, 'he's awful, he's a horrible man. Why are you playing [him] so nastily?' So I suppose in some ways that means that I've done my job right.

"I don't know. I think I personally have huge empathy for him and hopefully people will. The thing that Emma and I set out to do is tell as unbias a story as possible and just try and lay out… a version of how marriage tragically breaks down. It's never one-sided, people have their own failings and their own positives. So hopefully people come out and don't hate them too much.

"None of us know what their marriage was like in real life."

The Crown season four launches on Netflix on 15 November

(c) Sky News 2020: The Crown's Charles and Diana: 'Hopefully people won't hate them too much'