Coronavirus: The new Batman movie is still being filmed in Liverpool - despite the city's Tier 3 restrictions 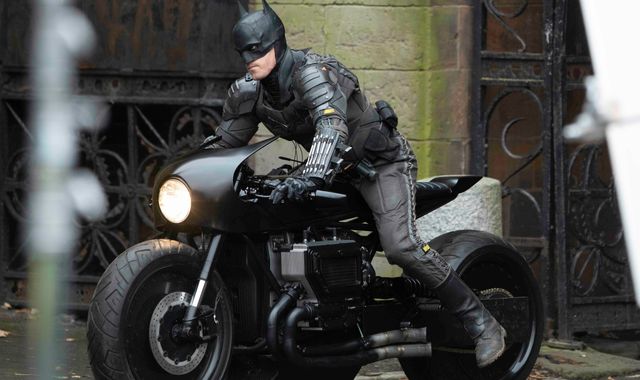 With heightened COVID-19 restrictions announced for Liverpool, people may have been surprised to see part of the city transformed into Gotham for filming on the new Batman movie.

Hollywood star Robert Pattinson, who plays the Dark Knight, and an unrecognisable Colin Farrell (wearing heavy prosthetics to become comic book villain the Penguin) have been photographed in character on set.

Production on The Batman began in Glasgow earlier in 2020, but was halted due to the coronavirus pandemic. In September, it was widely reported that Pattinson had tested positive for the virus, although this was not confirmed by filmmakers Warner Bros.

Now, filming has resumed in Liverpool - in the same week it was announced that the city would be the first to be placed under strict Tier 3 restrictions, the most serious, due to a high number of COVID-19 cases.

Photographs of the production - with Gotham police cars and news vans, and Batman seen riding through the streets - have raised questions as to how filming is able to go ahead when residents are banned from socialising with other households both indoors and outdoors, including in private gardens, and bars, gyms, betting shops, casinos and pubs that do not serve meals are being closed.

A spokesman for Liverpool City Council assured residents that safety measures are being adhered to.

"The new restrictions in Liverpool will not impact on filming in the city," the spokesman told Sky News. "The Film Office is working closely with every single production to ensure COVID-safe measures are in place and are being adhered to."

While Warner Bros has not confirmed the exact safety measures in place for The Batman, it is not the only production to keep filming during the pandemic.

In an interview in September, Oscar-winner Eddie Redmayne confirmed filming had resumed on the latest film in the Harry Potter spin-off series Fantastic Beasts

And reality shows including Strictly Come Dancing and I'm A Celebrity… Get Me Out Of Here! are gearing up for new series, with I'm A Celebrity! moved from the Australian jungle to a castle in Wales due to the pandemic.

For films and shows that are going ahead, some cast and crew members have been living in bubbles ahead of filming when necessary, and regular testing is taking place.

This has proved vital, with Britain's Got Talent and Little Mix: The Search both announcing this week that crew members had tested positive, delaying filming.

Other safety measures on TV and film sets include social distancing measures and masks for crew members and actors when they are not on screen.

In September, Sky News joined Liz Hurley and other stars on the set of Father Christmas Is Back in York, where cast and crew had been living in a bubble for up to five weeks.

Director Philippe Martinez called on a risk assessment firm, employing an officer known as "COVID Dan" to make sure everyone was adhering to the rules and restrictions.

"The safety measure we employ are very stringent," Sky News was told. "If you're part of our bubble, our crew, our cast, the first thing you do before coming on to set or on any of our locations is you're temperature tested, you put a new mask on.

"If you're one of the crew that touches the equipment, you need to wear gloves and you need to follow a strict set of guidelines, including following a one way system."

On The Batman set, Pattinson has been seen sporting a mask when not on camera. Farrell has also been seen using a clear face shield in between takes, with extras and members of the crew also wearing face coverings.

The film, which is directed by Matt Reeves, sees Pattinson, 34, follow in the footsteps of actors including Christian Bale, Ben Affleck, Val Kilmer, Michael Keaton and George Clooney in playing the superhero.

(c) Sky News 2020: Coronavirus: The new Batman movie is still being filmed in Liverpool - despite the city's Tier 3 restrictions