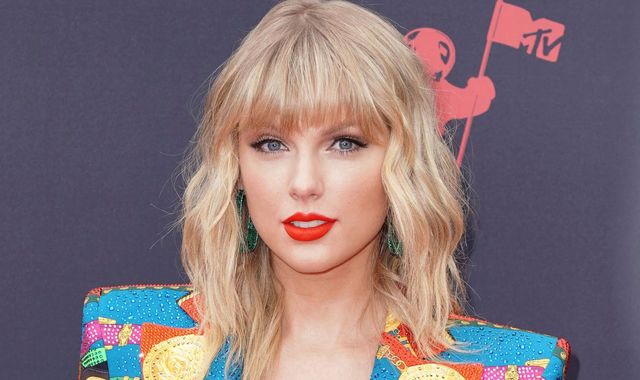 Taylor Swift has finished re-recording her hit 2008 album Fearless - along with six previously unreleased tracks - and teased the release date in a cryptic message to fans.

The US pop star is busy re-creating her first six albums - including Red and 1989 - following a high-profile and very acrimonious master recording dispute with music mogul Scooter Braun.

She revealed on Good Morning America the news that the song Love Story was going to be the first to be released.

Swift, 31, also posted more information on her social media channels along with a cryptic code signalling the full album would be released on 9 April.

Speaking on the US breakfast show, Swift said: "I'm so excited to share with you that tonight at midnight I will be putting out my version of my song Love Story, which was originally on my album Fearless.

"I've now finished re-recording all of Fearless, which will be coming out soon.

In her social media post, in which Swift called the album "Taylor's version", she told fans: "Artists should own their work for so many reasons, but the most screamingly obvious one is that the artist is the only one who really *knows* that body of work.

"For example, only I know which songs I wrote that almost made the Fearless album, songs I absolutely adored but were held back for different reasons (don't want too many breakup songs, don't want too many down tempo songs, can't fit that many songs on a physical CD).

"Those reasons seem unnecessary now. I've decided I want you to have the whole story, see the entire vivid picture, and let you into the entire dreamscape that is my Fearless album."

She said she had written the previously unreleased the tracks which will be included in the new album between the ages of 16 and 18 and that it had "killed" her to leave them behind.

The rights to Swift's early work were sold for a reported $300m (around £216m) last year by her former record label Big Machine.

At the time Swift said she hadn't been given the option to buy back her music, and accused Braun of "incessant, manipulative bullying".

On his part, Braun said Swift had been offered the option on the condition she signed a new 10-year deal. He also said he had received numerous death threats following their public dispute.

By re-recording her music, Swift hopes to re-direct revenue from use of the old tracks in TV, film, adverts and streams to the new re-recorded versions.

Swift moved to Universal Music Group in November 2018 in a deal ensuring she maintained the rights to her work.

She has since released the critically acclaimed albums Lover, Folklore and Evermore on the label.