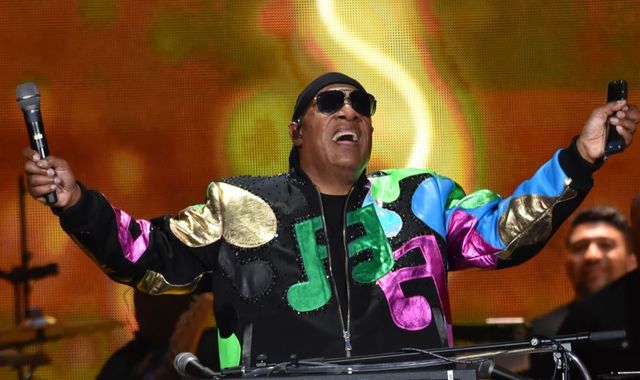 Stevie Wonder has released two new songs for the first time in four years after leaving Motown Records and setting up his own record label.

The piano-playing music icon released Where Is Our Love Song and Can't Put It In The Hands Of Fate on Tuesday, with a label other than Motown Records - after almost six decades under the legendary imprint.

Instead they were released under Wonder's So What The Fuss Music - distributed through Universal Music Group's Republic Records.

It marks a major move for the 70-year-old, who was signed to Motown Records at the age of 11.

Wonder made the announcement in a virtual news conference, where he also added it was the first time he had released two new songs on the same day.

The 25-time Grammy Award winner said he started writing Where Is Our Love Song when he was 18.

"Then came this year," he explained.

"With all the confusion and all the hate and the East versus West, left versus right. It's just a hard break."

All proceeds from the track - which features Grammy-winning guitarist Gary Clarke Jr. - will go towards the US-based non-profit organisation Feeding America.

The group is a network of more than 200 food banks and aims to feeds millions of Americans every year.

His second release, Can't Put It In The Hands Of Fate, features popular rappers Busta Rhymes, Rapsody, Cordae and Chika.

He said this song was originally about a relationship - but then he changed the words after adapting it to the current state of the world.

"We got to get on our knees and pray or whatever you do."

Wonder suggested his new songs were a nod to the Black Lives Matter movement, denouncing the idea of "All Lives Matter" and the use of the slogan to undermine anti-racist campaigning.

"I want everyone to be well," he continued. "I don't care what colour you are because actually I don't see your colour.

"I see the colour of your spirit and soul, and I'm seeing too many spirits and souls that are not about the love that we're supposed to have and feel for one another."

Wonder said he was planning on including the songs on a new and upcoming EP - his first full-length project since 2005.

In the news conference, the singer also gave fans a health update, saying he was "blessed with a new kidney" last year in December.

He said: "Since I have been released from the hospital, the nurses have made sure I've taken my medicine on time and I'm going to do it for as long as I have to, even if it is the rest of my life.

"I feel like I'm about 40 right now and I just thank everyone for the prayers and the love."