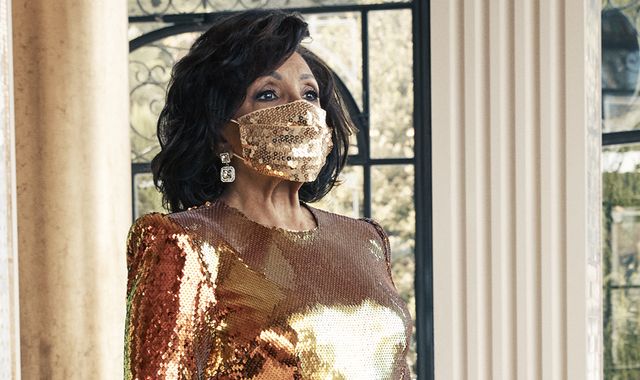 Dame Shirley Bassey has added a little glamour to her coronavirus protection measures, slipping on a sequined face mask and matching floor-length gown to celebrate 70 years in showbusiness.

The 83-year-old singer is also releasing her first new album in more than five years.

The golden ensemble channelled the James Bond Goldfinger movie for which she sang the theme in 1964, making her famous across the world.

The Welsh star was photographed in Italy earlier this autumn, in an ornate marble-filled room with Roman pillars and steel windows overlooking a garden.

She has described her forthcoming record, I Owe It All To You, as a "grand finale".

Dame Shirley has released 70 albums over her career and sold nearly 140 million records.

She is also the only artist to have performed more than one Bond song - having recorded three - Goldfinger, Diamonds Are Forever, and Moonraker.

She first started singing as a teenager in her native Wales, performing in pubs and clubs while also working in a factory.

She became the first Welsh singer to score a number one single, in January 1959, with As I Love You from the album The Bewitching Miss Bassey.

Other accolades include being the first recipient of the Brit Award for best British female solo artist in 1977, and being the first musician to be awarded the Freedom of the City of Cardiff.

She was made a dame for her services to performing arts in 2000.

Her last studio album, Hello Like Before, was released in 2014.

The new album, which will include both new and old material, will be released on Decca Records later this year.