Juno Temple on Ted Lasso, working with Justin Timberlake, and bringing cinemas back 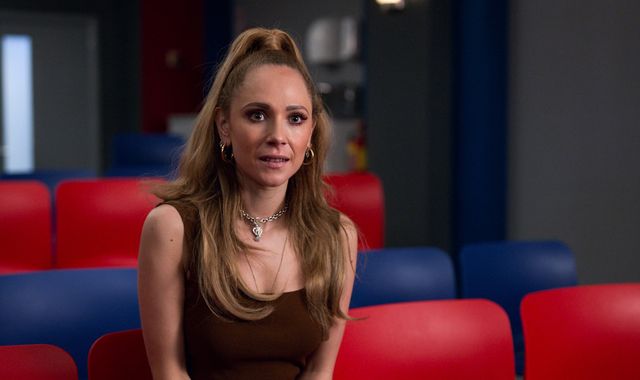 Having spent a "wild" year locked down in Los Angeles, British star Juno Temple is pleased to be back in Blighty and on set currently filming the second series of hit show Ted Lasso.

If it's not already on your radar, there's a lot of love for the series, not least in the form of two Screen Actors Guild and four Golden Globe nominations - including best actor in a comedy series for star Jason Sudeikis, and outstanding performance by an ensemble in a comedy series.

It tells the story of an American football coach managing a struggling London "soccer" team, and became something of a surprise hit for Apple TV+ when it launched in 2020. Temple, 31, plays Keeley Jones, a model and girlfriend of one of the club's strikers.

"Playing Keeley in such weird times, she's such an injection of joy that I can't help but feel a kind of lust for life playing her, I guess," the actress tells Sky News. "So I feel really grateful for her, to be honest."

Such has been the demand for content from record audiences during the COVID-19 lockdowns, the strict restrictions now prevailing TV and film sets seem all the more necessary to ensure production continues.

"I feel so lucky to be working and I think we're being so taken care of with the fact that we're being tested at all and making sure that we're safe and well," says Temple. "It's probably the safest place I could be in my life right now."

Before the first lockdown hit, Temple shot the film Palmer, opposite Justin Timberlake, in Louisiana.

It's a small-town America story from Oscar-winning director Fisher Stevens, about ex-convict Palmer (Timberlake), who forms an unlikely bond with a seven-year-old-boy, Sam, as his mum struggles against addiction.

The actress agrees that eight-year-old child actor Ryder Allen steals the film and is the heart of it, gifting her some powerful scenes as drug-addicted mother Shelly.

"She's losing this extraordinary child that she's missing in front of her," says Temple. "I read the script and thought she was a special girl because... obviously she's going through addiction... and she's losing the battle of it. She doesn't really know how to be a mother, but I think Sam is one of her best friends and they hang out like equals.

"So when it came to the moment where I have to come and see him and say, I think it's better if he stays with Palmer, when I read the script I thought that was such a profoundly moving moment because it was like she was the child and he was grown up."

It's a long way from playing Keeley in Ted Lasso.

"It was definitely quite a headspace to be in but at the same time, I think it's important to explore things that make you sometimes feel a bit uncomfortable," Temple says. "I think having empathy for humanity as an actor is the most important thing."

She describes Timberlake as "brilliant" and says Allen, like her Ted Lasso character, was "an injection of joy".

She continues: "He's got such a huge open heart and such a curiosity and such a beautiful way of looking at life that is so apparent on film too.

"I know he's going to have quite the career, that young man."

Temple should know. As a child actress herself, at the age of 11 she was directed by her father (Julien Temple, director of films and music videos for the likes of David Bowie and the Rolling Stones, as well as mate of the Sex Pistols) in Pandaemonium, starring John Hannah and Samantha Morton.

In her teen years, she played Cate Blanchett's daughter in Notes On A Scandal, and then Lola in Atonement opposite Benedict Cumberbatch, Kiera Knightley and James McAvoy. Via St Trinian's and The Other Boleyn Girl, she won a BAFTA - the EE Rising Star award - at 23.

It's been quite the trajectory, and whether she's playing a fairy godmother in Maleficent alongside Angelina Jolie or starring in Mick Jagger and Martin Scorsese's HBO Sky Atlantic series Vinyl, her performances are widely praised.

As the silver screen is increasingly eclipsed by the small, with cinemas closed and streaming giants such as Netflix seemingly serving up the majority of current films, while Temple's latest projects are with Apple TV+ she is no less sad for the industry.

She continues: "I hope cinemas come back soon.

"I think everyone should pitch in and do drive-in movie theatres. You've got to bring those back because you could go in your own car and be safe."

You heard it here first.

Palmer is out now on Apple TV+