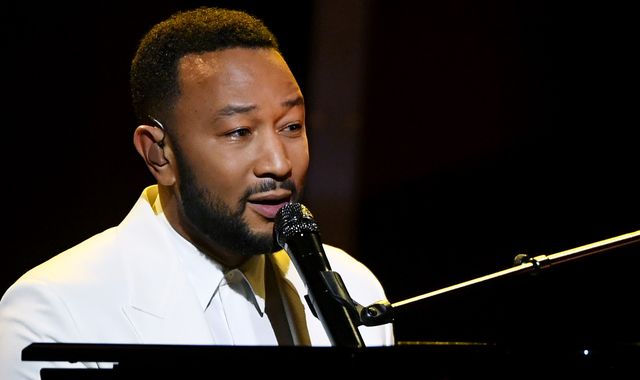 Musician John Legend has shared a touching tribute to his wife Chrissy Teigen, following the loss of their baby earlier this month.

On Thursday, Legend dedicated his performance of his single Never Break at the 2020 Billboard Music Awards to his wife.

He has since shared a video of his performance to Instagram with a caption that pays tribute to her, saying: "I'm in awe of the strength you've shown through the most challenging moments."

Earlier in the month, Chrissy Teigen posted a series of black and white pictures on Instagram in which she revealed that they had lost their baby during pregnancy.

She had been sharing details of the pregnancy on social media, and earlier that week had reassured followers that the baby boy was healthy after she suffered excessive bleeding.

Following the loss of their baby son, the model and TV personality said on Instagram "we are shocked and in the kind of deep pain you only hear about, the kind of pain we've never felt before".

"We were never able to stop the bleeding and give our baby the fluids he needed, despite bags and bags of blood transfusions. It just wasn't enough."

The Instagram gallery included a picture of Teigen bent over crying while sitting in her hospital bed, as well as one in which she is cradling the baby as her husband leans in.

In the post, she also revealed that the couple, who have children Luna and Miles together, had decided to name the baby Jack.

"We never decide on our babies' names until the last possible moment after they're born, just before we leave the hospital. But we, for some reason, had started to call this little guy in my belly Jack. So he will always be Jack to us. Jack worked so hard to be a part of our little family, and he will be, forever.

"To our Jack - I'm so sorry that the first few moments of your life were met with so many complications, that we couldn't give you the home you needed to survive. We will always love you."

Later in the post, he thanks his fans for their support following the loss of his son and says he has been comforted by the stories of families who have had similar experiences.

"We feel and appreciate your love and support more than you know.

"More than anything, we've heard so many stories about how so many other families have experienced this pain, often suffering in silence. It's a club no one wants to be a part of, but it's comforting to know we're not alone."

(c) Sky News 2020: John Legend shares touching tribute to his wife after the loss of their child