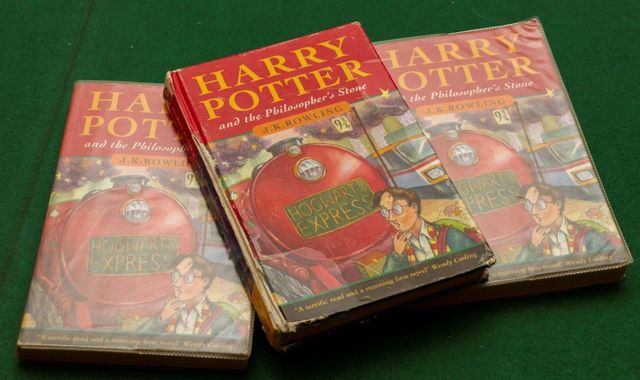 A first edition Harry Potter book has sold for £33,000 at auction - after being found in a skip.

The rare hardback copy of Harry Potter and the Philosopher's Stone was salvaged from the skip at a Buckinghamshire school, and was sold with four other novels from the series that were also discovered dumped.

And first edition copies of the Chamber of Secrets and the Prisoner of Azkaban made £360.

Due to coronavirus restrictions, bidders took part in the international auction by phone and online.

The Philosopher's Stone hardback was bought by a private UK buyer.

The anonymous seller, a 65-year-old teacher, said: "To say I'm pleased is an understatement. Due to its condition, we thought £20,000 would be a good result. We watched the auction and the price just kept going up and up."

The highly sought-after books could have been lost to landfill, had the teacher not spotted the copies in a skip at a school where she used to work in 2008 and stored them in her loft.

She added: "I love books and reading and it just seemed awful to throw them away, so I picked up about five Harry Potter books. I thought they might be useful for my children or grandchildren in the future. It was better than seeing them go to waste."

Jim Spencer, head of Hansons' Library Auction, said: "I'm delighted for our vendors. It was marvellous to see the Harry Potter books do so well and spark such intense bidding.

"I always thought the Philosopher's Stone hardback first edition might surprise us. I put on a humble estimate due to some damage to the binding.

"We had lots of interest, particularly from America, in what was a special Harry Potter-themed library auction.

"We sold a multitude of books for several clients, some signed by JK Rowling.

"Another highlight was a Philosopher's Stone paperback first edition in pristine condition which made £6,500."

Harry Potter and the Philsopher's Stone is the first book in the beloved series, which spawned films, merchandise and even theme parks.