Groove Armada: Ministers behind COVID policies 'have probably never been to a nightclub in their lives' 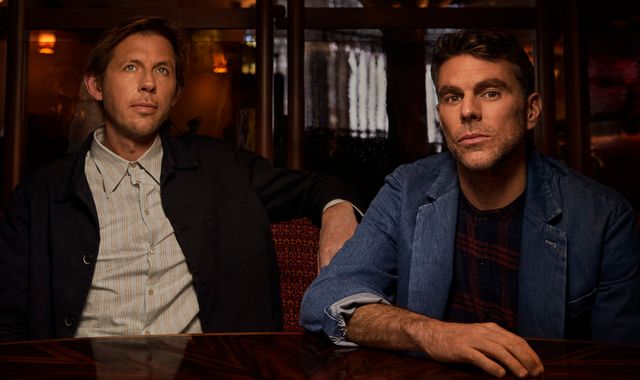 Groove Armada have told Sky News it is "heartbreaking" to see government ministers making decisions about the future of the late-night music industry when they have "probably never been to a nightclub or festival in their entire lives".

Known for their huge live performances, with hits including Superstylin', I See You Baby, At The River and Get Down, the dance duo - Andy Cato and Tom Findlay - have just released their first album in 10 years.

The closure of the music industry, from clubs to live gigs, since the coronavirus pandemic fully hit the UK in March, is not only a huge loss to the economy, but also to "cultural togetherness", they said.

"Those high points that give people a focus in their lives... these are all really crucial parts of living in a functioning society," Cato said. "As we take decisions about balance of risks we have to bear all this in mind.

"Purely economically, we know that behind the events there's a whole multimillion-pound industry, which is predicted to lose 70% of its workforce by the end of the year.

"Highly skilled people, the UK is the best in the world at this. And two-thirds of them [could be] redundant by the end of the year. So, yeah, there's an economic question and there's a cultural question.

"And music is the togetherness business, it's the opposite of the social distancing business. We've got to find a way of getting back on track in some way because the long-term consequences will be dramatic."

Among the gigs Groove Armada had planned for this year was Glastonbury in June.

They are now "holding our breath and crossing everything" that the festival and other shows cancelled due to the COVID-19 crisis - for themselves and other artists - will return in 2021, Cato said.

Live music's return and nightclubs re-opening safely is an issue that needs to be dealt with by people "who know what they're talking about", said Findlay.

"Obviously, we come from the dance music industry, but all the best relations in [my] life I built through those moments of coming together on dancefloors and working around the music industry.

"It's pretty heartbreaking at the moment to see a series of government ministers being put up there who don't seem to care about the industry, probably never been to a nightclub or a festival in their entire lives, telling us that this is a disposable industry.

"It's just not, and you can't take these experiences away from people.

"We've got to get people around the table, people who actually know what they're talking about, and find a way forwards for music in the UK."

He added: "I think we've all just got to come together, put pressure on the government to make sure that, like Andy says, in spring 2021, people are thinking through the various scenarios to make sure we're able to do this in a safe way again."

Groove Armada's new album, Edge Of The Horizon, is out now

(c) Sky News 2020: Groove Armada: Ministers behind COVID policies 'have probably never been to a nightclub in their lives'