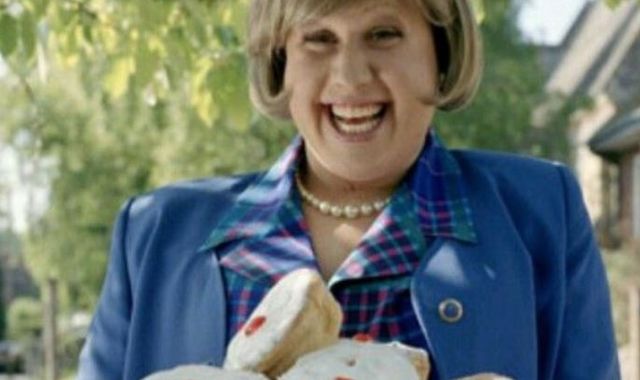 Matt Lucas has been announced as the new host of Great British Bake Off.

He joins Noel Fielding and judges Prue Leith and Paul Hollywood in the famous Bake Off tent, replacing Sandi Toksvig, who announced in January that she was stepping down after three years.

"I'm chuffed to bits to be joining the most delicious show on television," Lucas said in a statement sent to Sky News.

"I can't wait to break bread with Noel, Prue and Paul and meet the brilliant bakers. And bearing in mind my love of cake, I've already ordered some much larger trousers in anticipation. See you in the tent!"

"On your marks, get set… say hello to the newest member of the Bake Off team - @RealMattLucas #GBBO," the official Bake Off account tweeted, along with a video of Lucas practising his Bake Off presenting skills alongside Fielding.

Actor, writer and comedian Lucas first rose to fame in Vic Reeves and Bob Mortimer's Shooting Stars in the 1990s, and went on to have massive success with Little Britain with comedy partner David Walliams.

He has also appeared in films including Bridesmaids, Alice In Wonderland and Paddington, and on stage in Les Miserables in the West End.

Welcoming him to the Bake Off team, Noel said "I love Matt. I love his warmth and his comedy and his big joyful smile. I think if we play our cards right we could become the next Chas and Morph."

Filming for the Channel 4 show, which moved from BBC1 in 2017, begins in the spring.

Director of programmes Ian Katz said they are looking forward to working with Lucas.

"We're thrilled that one much-loved national institution is joining another," he said. "Matt has everything it takes to be a great Bake Off presenter: he's warm, hilarious and loves cake."

Judges Hollywood and Leith have also welcomed their new star.

Hollywood is the only star who has been with the hit show since its launch in 2010, with original judge Mary Berry and presenters Mel Giedroyc and Sue Perkins departing when the show moved to Channel 4.

"I'm a genuine fan of Matt's, it is such great news he will be joining us in the tent," he said. "He's a fantastic addition to the team."

"The combination of Matt Lucas and Noel Fielding! Will we stop laughing and get any filming done?" said Leith.