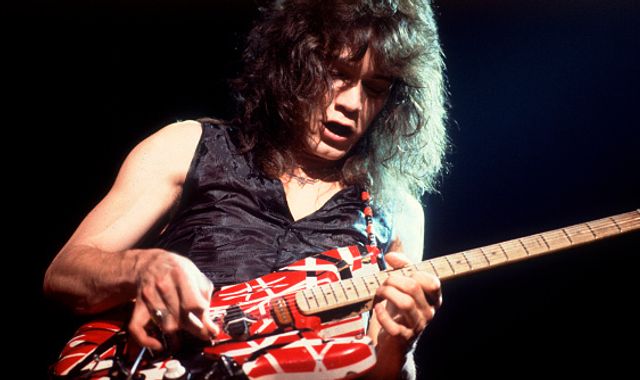 Rock star and guitar great Eddie Van Halen has died aged 65 after a "long and arduous battle" with cancer, his son has said.

In a statement, Wolf Van Halen said: "I can't believe I'm having to write this, but my father, Edward Lodewijk Van Halen, has lost his long and arduous battle with cancer this morning.

"He was the best father I could ever ask for. Every moment I've shared with him on and off stage was a gift.

"My heart is broken and I don't think I'll ever fully recover from this loss.

He is understood to have most recently been diagnosed with throat cancer after first beating the disease in 2002.

Van Halen formed the band of the same name in California in 1972, with David Lee Roth on vocals, his brother on drums, and Michael Anthony on bass.

They are best known among a mainstream audience for their crossover hit single Jump, with its signature keyboard line.

The record it was taken from, 1984, sold 10 million copies in the US alone - and the band went on to sell more than 50 million albums in their home country.

Other hits include Why Can't This Be Love and Runnin' With The Devil.

Michael Jackson also recruited Eddie Van Halen for the distinctive guitar break on Beat It - a contribution he later said took about 20 minutes.

Van Halen is widely regarded as one of rock's best guitarists and used many of his band's songs to pioneer the finger-tapping style.

In 2012, readers of Guitar World magazine voted him the greatest player ever.

Tributes have come from some of rock's biggest names, with Kiss frontman Gene Simmons tweeting: "My heart is broken. Eddie was not only a Guitar God, but a genuinely beautiful soul. Rest in peace, Eddie!"

Tony Iommi from Black Sabbath said he was "devastated" and posted a picture of the pair.

"He fought a long and hard battle with his cancer right to the very end," said the guitarist.

"Eddie was one of a very special kind of person, a really great friend. Rest In Peace my dear friend till we meet again."

"I just heard about Eddie Van Halen and I feel terrible about it," tweeted Wilson.

"Eddie was such a great guitarist and I remember how big Van Halen was, especially here in L.A. Love and Mercy to Eddie's family & friends."

"I love you Eddie Van Halen, an LA boy, a true rocker. I hope you jam with Jimi tonight. Break through to the other side my brother."

Whitesnake's David Coverdale called him an "astonishing musician", tweeting: "Thank You For Your Extraordinary Gifts You Chose To Share With Us...XXX"

Van Halen was first diagnosed with tongue cancer in 2000 and had part of it removed.

In recent years he is understood to have been diagnosed with throat cancer.

In a 2015 Billboard interview, he blamed it on the metal guitar picks he used to hold in the same spot in his mouth.

He told the magazine: "I mean, I was smoking and doing a lot of drugs and a lot of everything. But at the same time, my lungs are totally clear. This is just my own theory, but the doctors say it's possible."

Born in Amsterdam, his family moved to Pasadena in California in the 1960s and a decade later the band were established regulars on the LA music scene.

Their big break came when Warner Brothers signed them in 1977 and their eponymous album was released a year later.

The four-piece became one of the biggest bands of the 1980s but Roth was replaced in 1985 by singer Sammy Hagar, before rejoining temporarily in 1996, and again in 2006.

In 2007, they were inducted into the Rock and Roll Hall of Fame and released their most recent album, A Different Kind of Truth, in 2012.

Despite the song being unimaginable without it, Van Halen said he was always amused by how many people mentioned his guitar part in Jackson's Beat It - especially as he didn't appear in the video and wasn't credited.

"I think it's funny the way people talk about that," he told Billboard. "It was 20 minutes of my life.

"I didn't want anything for doing that... I literally thought to myself, 'Who is possibly going to know if I play on this kid's record?'"