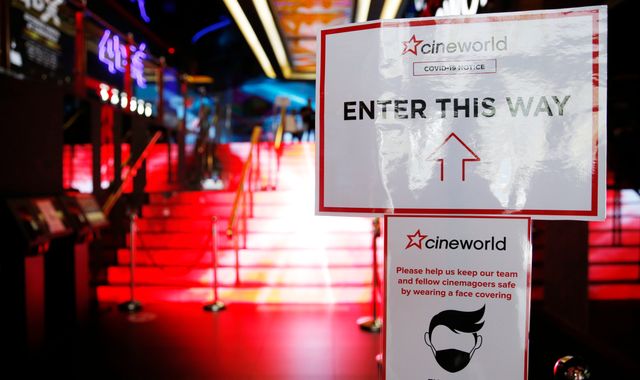 Cineworld is considering closing all of its cinemas in the UK and US this week because of the impact of coronavirus.

A company statement said: "We can confirm we are considering the temporary closure of our UK and US cinemas, but a final decision has not yet been reached.

"Once a decision has been made we will update all staff and customers as soon as we can."

The news comes after the announcement that upcoming Bond film No Time To Die has been pushed back to April, after it was set to be released in cinemas next month.

The closure of all Cineworld's 128 UK and Ireland cinemas, would put up to 5,500 jobs at risk.

The decision may be announced as early as Monday with the chain's bosses preparing to write to Boris Johnson and culture secretary Oliver Dowden to say the industry has become "unviable".

Cinemas were closed in March when the UK went into a national lockdown, but reopened in England on 4 July.

The industry has struggled during the coronavirus crisis and last month Cineworld announced half-year losses of $1.6bn (£1.3bn).

There was solid demand for Christopher Nolan's action-thriller Tenet last month, but the postponement of the latest Bond film's release will have been a huge knock-back for cinemas.

The film's producers said the change was to allow it to be seen "by a worldwide theatrical audience".

On Friday, the highly-anticipated Fast and Furious sequel F9 was also delayed again, while Disney's live-action version of Mulan was released on Disney Plus last month rather than in theatres.

Cineworld Action Group, which is run by employees of the cinema chain, claimed there was "no consultation with staff whatsoever" on the apparent decision.

"We have found out vital information about our jobs from the media throughout the pandemic. Workers have been left out of discussions that should've included our voices," they wrote on Twitter.

The group also alleged that members of staff were sacked by scripted phone calls in March and that health and safety concerns were "consistently ignored".

Cineworld previously said it had used government support schemes to support the wages of its 37,000 staff during lockdown.

(c) Sky News 2020: Cineworld could close all cinemas in the UK and US this week